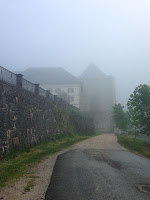 Woke up at 7am, got kicked out of the monastery at 8am. Ugh, it was the worst of mornings. I had just gotten my period and I was still jet lagged and all I wanted to do was lay in my bed for a little while but no, I was unceremoniously ordered out. I peeked out of the window and it was all misty fog, cold, wet, and miserable looking. Everyone was already out the door with their raincoats on and their rain gear over their packs and I was wishing I was anywhere else but here right now. I made my way to the bathroom to wash my face (and I ended up leaving my face wash, abandoned item 3), brush my teeth, and have the dry heaves for a minute again. It was all I could do to pack my things and put on my rain coat and rain gear for my pack. On the way out, I left my jeans, 2 tank tops, 1 bra, and 1 linen shirt on the lost and found table (abandoned items 4-8). 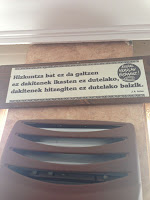 The drizzly morning did nothing to revive me. I could've, should've had a quick bite and warm drink before setting off but I myself was in a fog so I just started walking along. It was flat to begin with but then gently started going uphill. Thankfully I had no cramps, but I had absolutely no energy and my heart was beating so hard I could feel it in my chest and hear it in my ears. One step in front of the other, an endless cycle that slowly pushed me further and further into total exhaustion, and it wasn't even 10am yet. I had to sit down. There were many pilgrims at this point merrily walking past me but I didn't care. I would trudge a bit further and then I had to sit down again. What did I care, I didn't have anywhere to be today, my "to do" list was clean. I told myself all I had to do today was find food, water and shelter and I had all day to do it. So take your time. 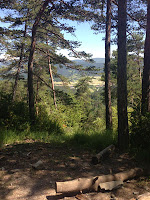 I sat there by the side of the path and decided to abandon a few more items right on the Camino. Out went the yoga pants (I had brought two pair, what was I thinking!), out went the other two linen tops and another cotton t-shirt (abandoned items 9-12). An elderly pilgrim man offered me a cupcake and I refused but he insisted so I took it. The sugar actually made me feel a bit better and I trudged on. The path was pretty at this point as it ran along the Rio Erro. The fog cleared and the sun came out and I made it to Gerendiain, an ancient hamlet and the beginning of stage II of the Codex Calixtinus. By the way, whoever says Spanish is a lot like French has not been to Northern Spain, it is nothing like French, and here in the Basque country it looks even more like Greek (why didn't I take a Spanish class!). 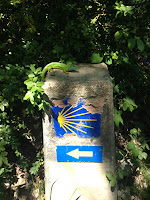 Just as I was eating my first morsels and wondering why I didn't go to the islands instead, I was making the lovely decision to stay there for the night (it was only 11am) but a group of my extended family came around the corner and stopped at the cafe with me: Dee, Anna, Lauren, Crystal, Esther, Jenn, Phyllis, Anton, they were all there. They had gotten a late start after lingering awhile at breakfast. Turns out Jenn was excited about the yoga pants she found that someone had abandoned along The Way; they all got a kick out of it to find out they were mine. We laughed and I led them in a series of sun salutations, crazy pilgrims. They definitely cheered me up and insisted that I go on with them. They were my angels that day! They literally lifted me up and kept me going. 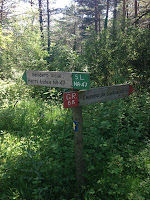 The next stretch was beautiful but tough. It was mostly natural pathways but it kept going up and then down and then really up and then really down. There were several gates that you had to open and close while you were going through the farmland. A group of us headed up the next mountain and eventually lost one another. That's how it seems to work; you head out together, everyone has their own pace so you end up walking alone, and then at some later destination you may or may not meet up again. I was walking up the mountain and a melody kept coming into my head, it was the same beat of my footsteps and by humming it over and over, it kept me going. When I arrived at the top of the mountain, Anton and Esther were there. I was describing how much better I felt and humming the tune and Esther said the song was "Carmen" - here I was channeling a Spanish opera on the Camino! 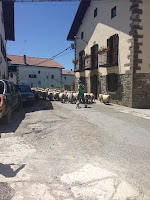 When the others made it to the top they were complaining complaining complaining. It was true, even though the first two days were the hardest, this day was the third hardest! We stopped for lunch and had sandwiches (bocadillos) and cerveza grandes (large beers). The local shepherd tended his flock down the main street (picture) and once again, no one at the cafe spoke anything but Spanish. We headed out again, destination Zubiri, and this time Dee and I were the slow pokes at the back. We took our time, she smoking now and then, and me taking puffs and tending to what was now a full-blown blister on my left toe. By the time we made it down the never-ending, slippery, rocky hill to Zubiri, we were hobbling in and could barely cross the bridge. 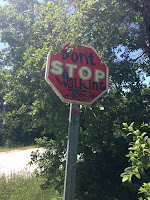 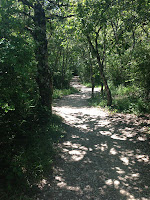 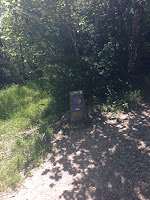 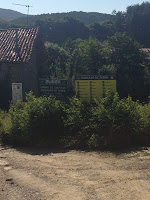 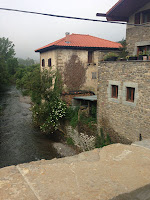 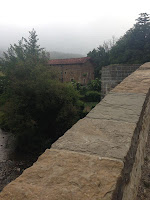 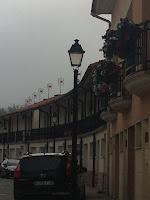 We had talked about staying at the Municipal Alberge but Dee and I decided to get our own room at a casa rural (which is basically a room in someone's house, like a B&B) so instead of paying 10 Euro there, we each paid 12 Euro here and shared one room (with shower down the hall). Turns out Lauren and Crystal did the same thing and had the room across from us. We met the others and all went out to dinner on the opposite side of town. It was a nice family-style place (even though the bartender was rude). I watched Italy beat Uruguay :( on Spanish soccer television and we all ordered the pilgrim menu. Some of the clan were teasing me because there was this outspoken American woman in the group and they kept calling her "my friend." I realized what my Mom had told me, "they tease you because they like you." Sure enough, they weren't teasing her because they didn't want to engage with her, they were teasing me because they liked me. And so it began, my ability to be teased forever changed and now it doesn't bother me! It's a miracle.

They were also teasing Anton, who got lost by going down the left side of the trail on the mountain yesterday and got "attacked" by a sheep. It kept nipping at his legs, so much so that he dropped and broke his cell phone and today, his backpack strap broke. They dubbed his new nickname to be "Running with Sheep." We all headed back to the main square and Dee and I chatted for awhile with Steve from Indiana. He was a mechanic and his wife and most of 4 others were doctors and he said they were surviving because they had a traveling pharmacy. This is when Dee introduced me to Brian from Ireland, who was sitting with Walter from Germany. She and I had no curfew that night because we were in the casa rural so we stayed out until 11pm. It was a strange scene, like something out of an old foreign movie, the whole village seemed to be out and it was still light outside and the church bells still ringing loudly.  I walked 21.5 kilometers today and I was grateful to finally get back to our two-person room even though the creaky bed left much to be desired. 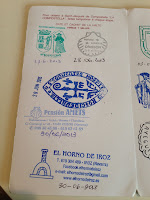 "The most empowering relationships are those in which each partner lifts the other to a higher possession of their own being."
- Pierre Teilhard de Chardin