Post-departure on the Camino 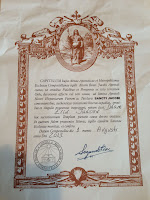 I slept in to my heart's content. No more morning rituals. No more angst about the unknown. I had successfully completed the Camino and was no longer a pilgrim. I lingered in bed and booked my flight from Madrid back to the States and got ready, then headed into town. Dee and I said goodbye. She was going on to Finnisterre and I wished her all the best!

First stop, the Pilgrim Office where I stood in line with a bunch of us, and received my certificate. It's in Latin and it talks about the sacrifices I made doing it on foot from St. Jean to Santiago. I will frame it next to my other degrees. I have yet to meet someone who has done the Camino (other than all of us here) but if/when I do, that person will have my highest regard. I am proud to be part of this club! 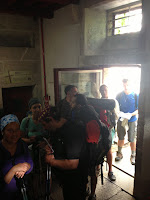 Second stop, down the rua de San Pedro to the famous Gate of The Way (Porta do Camino) which gives access to the wonderful old medieval city and on to the Praza Obradoiro and Cathedral. There were many candles and flowers outside and the flags were still at half mast. As I entered the Cathedral I was immediately grateful for my safe arrival. There was a pilgrim mass going on and so I stood and listened for awhile and then walked around slowly looking at everything. It is no longer permitted to put your hand in the Tree of Jesse but I saw it behind the barrier, where millions of pilgrims over the centuries have worn finger holes in the solid marble as a mark of gratitude for their safe arrival.  I went underneath and saw the coffin that contains the relics of St. James and then I wandered towards the back and just as I was leaving I saw Raphael! We hugged each other, gave kisses on the cheeks and were smiling so big that no words were needed. All those times I wondered if I'd see him again and here he was at the last place, in the last space, on the last day, in the Cathedral. He was going on to Finnisterre so I wished him a happy life. I went to have lunch at the same place I had dinner last night, before I had to catch my train to Madrid. 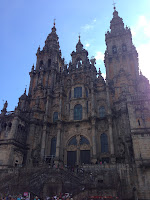 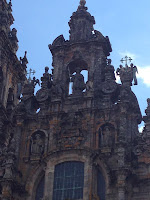 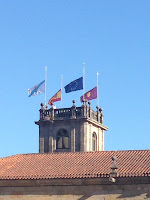 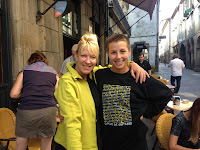 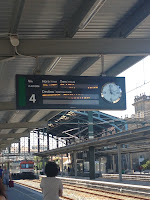 While I was sitting at the sidewalk cafe enjoying the last of my Tinto de Veranas, I looked up and saw Lauren from Washington! We were so happy to see each other again (picture), we caught up for a few minutes and then she rambled on, still with the German girl she met at San Bol. They had traveled together the rest of The Way and they were headed to Finnisterre so I wished them the best and waved goodbye. I also saw Helen and Lawrence from Ireland and like with everyone, we hugged while we said goodbye. And right around the corner came Brian from Ireland, I couldn't believe it! We were so happy to see each other again too. He sat down for a few minutes but had to run to catch a flight to Madrid. He was so happy I think he was crying. I made my way down the cobblestone streets towards the train station. An hour later the train started and it passed by the very curve where the accident had happened. It had all been cleaned up but the Spanish people on board were all a flurry and knew exactly where it was. I had 6 hours to go to Madrid. I settled into my chair and began reading for the first time the guidebook everyone had. Once I arrived in Madrid, I checked into the first hotel I saw, took a bath and ate dinner in my room. I had all day tomorrow to explore Madrid and now I was happy to have arrived again somewhere safely and to have a quiet night on my own. 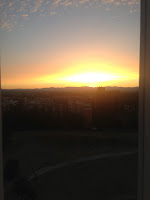 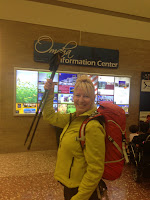 The next morning, Fri Aug 2nd, I took a cab to the Calle Mayor of Madrid. I had no idea if Madrid even had a Calle Mayor but since every other town in Spain seemed to have one I reasoned Madrid must too. Sure enough, there it was (picture above), a lovely reminder that I'm still in Europe. I had lunch and then found the "red double decker tour bus" and hopped on and spent the afternoon seeing the sights of Madrid. I headed back to my room in time to see the last Spanish sunset before I boarded a plane tomorrow morning. On Sat Aug 3rd, I got on board a westbound 747. Five weeks later from the day I left, I had another day of 19 hours worth of travel. By the time I got through customs in Newark, New Jersey thanks to my Global Entry card, and then survived a layover in Houston, Texas, I finally arrived around midnight in Omaha, Nebraska where Ellen picked me up and we drove three hours north to Sioux Falls, South Dakota where I'm staying for awhile. My historic journey was done and even though I was tired, I felt physically strong, emotionally cleansed, intellectually stimulated, and spiritually revived! When I was out there I thought "I've done this now, I don't need to do it again," but I'm pretty sure, I'll do it again.

“The real voyage of discovery consists not in seeking new landscapes but in having new eyes.”
– Marcel Proust