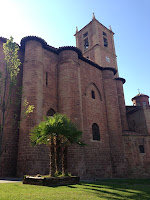 Up at 10am, down for breakfast in the hotel by 11am, checked out by noon, we all slept in as late as possible. The hotel breakfast was a nice buffet of all kinds of Spanish food but I was back to trying to force myself to eat and having the dry heaves (alone as silently as possible in the bathroom). Maybe it has something to do with brushing my teeth in a different sink each day because that kinda grosses me out. I think it also has to do with some kind of stress, some angst about not knowing where I'll lay my head tonight. Plus all of the exercise and then too much food and wine last night had my system all screwed up again. So much for my restful day in the previous hotel, I was back to being a pilgrim. 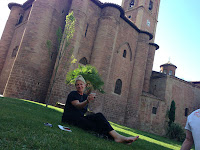 A few pilgrims decided to bus it back to Pamplona to watch the bulls run. It didn't take much convincing for the four of us to decide that we were going to bus the next leg forward into Najera. We headed to the autobus station, boarded, and proceeded to do 31 kilometers today the easy way. It was Anton, Anna, Dee and myself and even though we were moving a little slow, we were having a ball. We had all seen the movie The Way and I told them about the Wizard of Oz references to it. We decided that Anton from Ireland (who was still in his late teens) was like Jost, the cowardly lion character from Holland, who had just survived the break-up of an engagement and needed courage, and for whom kindness was an instinct; Anna from Denmark (in her 20s) was like Sarah, the mysterious Canadian tin-man woman who wants to quit smoking and who, communicated in such a beautifully direct way that even though we knew she had the biggest heart, others wondered, and it was an allure for them; Dee (in her 30s) was like Jack the chatterbox scarecrow character from Ireland, overly cognitive and analytical, she couldn't stand that actor and resented the association but then ultimately agreed; and Erin (in her 40s) was like Tom, the oldest one all the way from California who basically just wanted to be left alone, but was like the Dorothy character, suddenly finding herself swept away on this strange yellow-arrow brick road. There was something really nice about our pseudo-hollywood bond!!!!

I looked out of the window and I could see pilgrims on the trail while were speeding past them on the bus and it made me want to get back out there and be part of the Camino. At first I felt like I was cheating but then I decided this was just another part of the adventure along The Way and it made me realize how quickly cars and buses speed by everything. I had a greater appreciation for my efforts on the Camino.

Once we arrived in Najera, we found a private alberge and had a dorm to ourselves (2 bunk beds) which was basically set up in a laundry room. Anton headed off to the church to pray for his brother who had died years ago this very day, and Anna and Dee and I went out and ate Argentinian hamburgers and drank vino tinto (red wine). We wandered around the lovely little town of Najera and wandered in the stores talking to locals. I bought wine and saucisson for tomorrow's journey, and a new journal, and turned in relatively early with ear plugs in. I felt happy to be here right now with these three. Plus it was a good call to rest for a couple of days, my ass was thanking me.

"A great deal of talent and opportunity is lost to the world for want of a little courage. Every day sends to their graves obscure men whose timidity prevented them from making a first effort."
- Sydney Smith