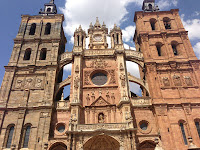 Woke up as late as possible, I think is was 10am. This is the first time I've stayed in the same hotel room two nights in a row. I was thrilled to be a normal tourist for a day! I even went to the gym and did yoga before heading to the breakfast room for a lovely banquet. Everything was there: fruit, egg dishes, meats, cereals, pastries, I ate as much as I could and pocketed a couple of their local pre-packaged desserts to try later. After another glorious shower / bath combo, I set out to see the sights of Astorga. 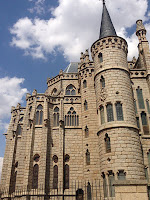 Astorga, set atop a steep ridge, is a medieval town with a great wall around it and a wide array of historic buildings. I figured out that I was in the Plaza San Bartolome, next to the church. I roamed all over the winding streets and alleyways of this charming town and saw the Plaza Cathedral (above) and the Palace Episcopal by Gaudi (left, where I got my passport stamped), as well as the Musee de los Caminos right next door. It was stunning. I felt connected. They say the word "gaudy" comes from the eccentric architecture of Gaudi. I even saw the original Iron Cross (Cruz de Ferro) that once stood atop Monte Irago. There were numerous Gothic cathedrals and Roman monuments, as well as a wide mixture of shops and specialty food stores.  The cakes and pastries here are world-known (mantecadas) and Astorga is also known for it's cheese. 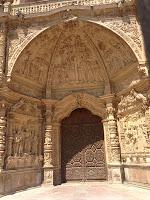 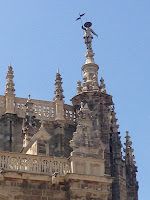 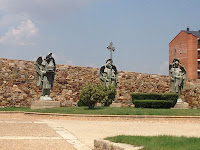 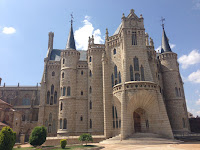 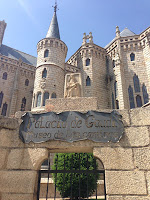 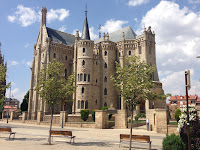 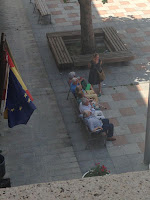 After a full day of sightseeing, I walked back to my hotel for a siesta. I washed my dirty socks in the bidet, I was cracking myself up over this one, and discreetly placed them on the window ledge in hopes they would dry. Just as I was admiring a group of elderly locals hanging out on the park bench out of my window, the afternoon church bells roared to life. And I do mean roared. I couldn't believe how loud and long and literally obnoxious they were. Good thing my siesta was already over! The group got up and moved on. The bells kept tolling, so long so that I finally took a video. Here is a video out of my front window capturing the sound of the church bells in Astorga! 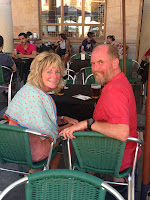 About this time I received word from Dee that she arrived in town so I went to the square and ran into Helen and Lawrence from Ireland (picture). I also saw Raphael from Spain again and was introduced to Maria from Spain. Even though she and I had seen each other at many times along The Way, we hadn't met yet. Dee arrived and we all ate and drank for hours in the plaza, her pounding radioactives and me sipping sangria as slowly as possible. I finally lured her away for awhile to check in at my hotel, which she did, and she got the room above mine. We went back out and after another bottle of wine, I called it a night. Even though we planned to get up early, I'm pretty sure she went back out. I, on the other hand, wanted to enjoy the last bit of luxury I knew I would have for awhile.

"Distrust yourself and sleep before you fight. T'is not too late tomorrow to be brave."
- John Armstrong