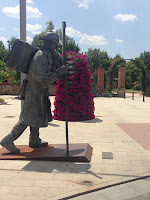 Up at 7am, out of the alberge by 8am. Brian from Ireland had asked me to wake him which I did. It was a decent night's sleep, in the large dorm of 30+ beds, no one had snored too loud, and now everyone was busy packing up. Post morning rituals, we had tea and coffee and pastries in the main room and headed out to get somewhat of an early start. The destination today: Astorga and there was a spa room at a hotel with my name on it. "Really?" he asked, "You're going to get a hotel room at a spa?" "Absolutely" I answered. There was no way I was going to stay in another alberge tonight, and even though I had a good time walking with him the past couple of days, it was running its course. Today we had a great day together for the first part of the walk and then I fell behind and lost each other on the latter half. 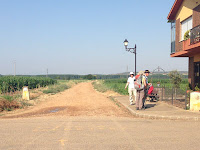 On the way out of Villadangos, we stopped at a cafe because he didn't have any pre-purchased pastries. We agreed it was the nicest cafe we'd seen and the woman was really friendly. By the time we got to the next town, there were a couple of his pilgrim friends from his new family, so we stopped again and I had some yummy sangria. By the time we got to the next town we had missed lunch but luckily happened upon a really cute cafe which was still open, and had the place all to ourselves. We hung out and agreed again, this place had the best bathroom either one of us had seen so far on The Way. 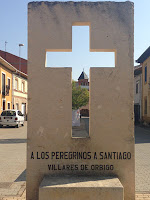 Other than me leaving behind my walking sticks and having to circle back one kilometer, things were going good. Until we came through the town of Cruceiro de Santo Toribio and thought we were going to get crucified ourselves. Some guy must have been hunting because suddenly we heard a loud gunshot. 15 seconds later, another loud gunshot, 15 seconds later, another loud gunshot, it was eerie. Brian started joking that he was taking pot shots at the pilgrims and I told him my road kill story. The gunshots continued for about 5 minutes while we were walking through a forest and then stopped. Hunters. At this point Brian sped up his pace and I kept my own. 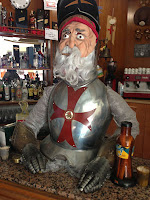 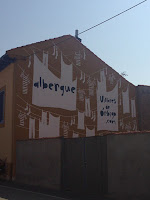 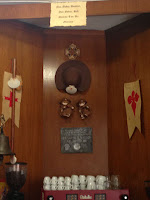 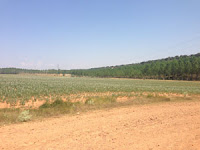 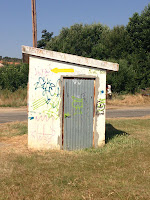 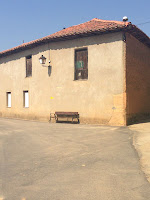 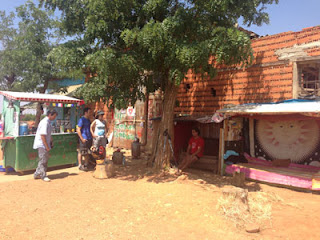 At the top of a mountain about ten kilometers from Astorga sat this outpost of a place with the cutest hippy-looking guy. I was intrigued but not feeling very communicative so I walked up and listened to his conversation with the others who were already there. The place was wild, you could lie down and repose, he offered donation-only food and drink, and he was preaching some kind of gospel according to him. I liked it but I stamped my own passport with his big heart love stamp, gave him a kiss on each cheek, and headed on before anything else could happen. 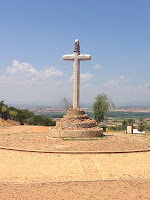 About five kilometers out of the city is a beautiful cross and you can see Astorga in the distance. It was gorgeous and just as I was coming over the hill, I was serenaded! Watch this video of a musician singing "Peregrino Peregrino, On Her Way to Santiago!" With Astorga in sight, I made serious ground going downhill, and then, just like at every other place, the last three kilometers into town were brutal. I met up with Alan and Karen from Switzerland who were so cute they were always holding hands, and he had wildflowers in his hat; I gave him the one I had picked for him at the hippy place. We were all hot as hell and dead tired and the path just kept going and going. Then we had to climb this monster ramp just to cross a railroad, and then head up the steepest hill you've ever seen (why do they do this to us!). Finally, around the corner, the cutesy city of Astorga. 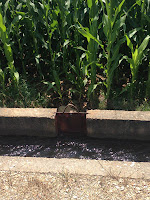 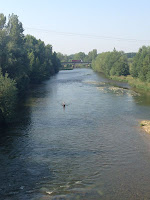 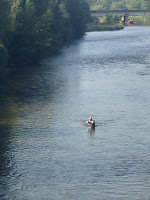 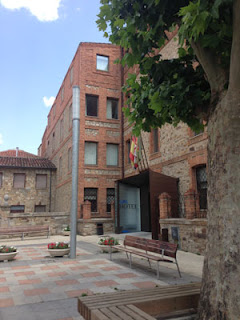 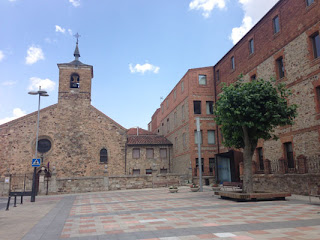 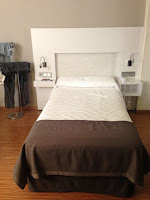 I immediately found the Spa Hotel and checked in. The hotel was awesome, and my room was amazing, my second favorite for sure. You can see it above, on the second floor, two windows with both curtains open but one of the them is only halfway open. That's where I was! And the bathroom, well, it became my sanctuary :) I lingered around for a long while soaking it all in, and then headed down for the 1-hour massage I booked while signing in. It was healing and just what my body ordered. I put on my skirt and flip flops and headed out to explore the town. It was still early so I ended up eating a bunch of tapas in the square while people watching. I had gotten word from Dee that she was going to bus it into Astorga tomorrow, so I decided I would stay an extra day and connect with her. With that plan in place, I headed back to my room for the longest bath ever and even fell asleep in the tub, until... 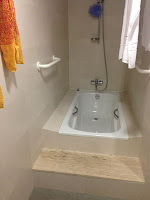 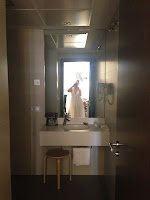 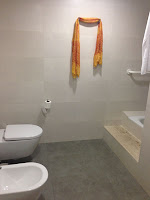 Until... outside of my window there arose such a clamor! I saw them preparing for it in the main square earlier, a big production, apparently of the Astorgans versus the Romans. I got dressed and joined in on the fun. There were fireworks, and choirs of men, women and children singing hymns louder than I've ever heard, bellowing actors playing out their parts on stage, and dueling sword fights in the Calle Mayor, it was awesome. I enjoyed it awhile longer and then headed back to bed. Earplugs definitely in. 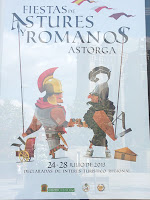 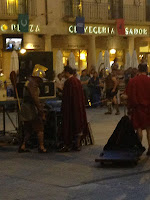 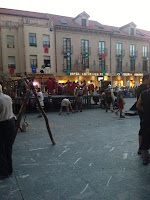 "The foolish man seeks happiness in the distance; the wise man grows it under his feet."
- J.R. Oppenheimer