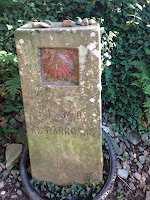 Woke up at 8am, out of the hotel by 9am, Dee was anxious to get going. I, on the other hand, had washed all of my socks and underwear the night before (why didn't I keep one pair out!) and they were still wet so in addition to my usual morning routine, I had to deal with that, and with her. I slowly made it down and met her outside for coffee, tea and pastries where she mentioned the trek today would be mostly downhill. I had on wet underwear and no socks, it was shaping up to be one of those mornings. She was in her own world and so was I when we set off. I put on my music for the third (and final) time on the Camino. This time I listened to the fun playlist I usually use to work out so that when I'd hear these songs at home, I could remember being out here too. Optimist. 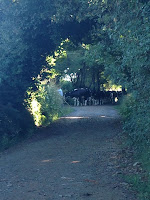 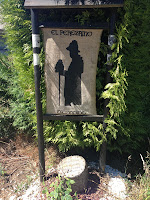 Arzua was the last major center of population before we entered Santiago. Some of the towns along here are modern and the waymarking is difficult to find. We stopped for a rest at a cafe and noticed a herd of cows coming down the Camino so we bolted out to get ahead of them. Eventually we lost track of each other pretty early on, she having the faster pace now, and I proceeded to make my way through tiny hamlets and quaint villages, dozens of them. The arrows were faded and the markers hidden and I realized the Camino is funny that way: there would be a fork in the road with no sign and so I finally figured out that you had to make a choice and go forth one way or another and then there would be the sign. If you went the wrong way, you knew it because you'd walk a little way and no sign so you'd turn around, go the other way and then there is the sign. Many people could not figure this out and they would stand paralyzed, unable to go forth, unable to make a decision.

The trek was supposed to be downhill today but downhill my ass! It was that slow, gentle, uphill, steady incline that I dislike so much. What is it about that angle, I don't know, but it makes me pant much quicker and my heart rate immediately increases. I had to pull over. Good feeling gone. My underwear was still wet, my socks on the back of my pack were still wet, and I was suddenly on my last nerve. I sat there trying to catch my breath and realized that my nerves had been stretched taut to the border of panic for so many mornings now, that the relief of finally making it this close to Santiago made me feel weak in the knees. I knew I could make it but it still wasn't a sure thing. 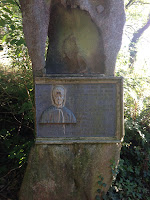 I got up and kept going and realized again the metaphor of the Camino and life. You have to go forth and make decisions and look at the after effects and gauge if you're on the right track; you have take action to move things forward in order to reach a desired outcome. And you have to do it, nobody else is going to do it for you. If your life is complicated, that's because you make it that way. It's true, everyone is basically living in their own reality and that is manifested in the world around them. The Camino was like a magnified version of life.

I kept steadily climbing and had to stop, realizing how much pain I was in again. Throat thickening, difficult to swallow. At this rate between the physical exertion and the mental fatigue, I'd have heart failure or a mental breakdown before lunch. I took several deep breaths, exhaling slowly until I was in control again and then realized I had lost my beloved water bottle holder (abandoned item 26)! Good grief, the narrow path above the hillside stretched west for nearly 8 kilometers before it faded into a thin line and disappeared behind the tip of the mountain. I still had a long way to go. 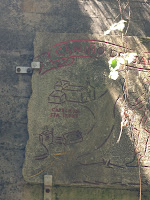 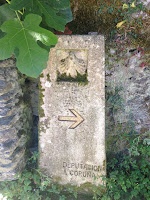 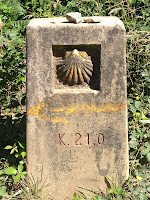 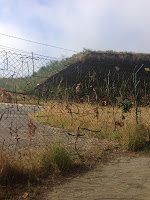 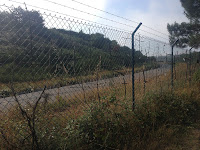 I had to stop several times along The Way to rest and in one particular town, it was so peaceful I filmed a short video of the rhythm of village life so I could always remember it!

After 19 kilometers I came across a tourist office and wandered in aimlessly looking at everything and nothing at the same time. They weren't helpful so I just headed over and found the nicest pamphlet that said O Pedrouzo and I left. When I looked at it outside, if was for a private alberge and it looked nice so I decided that's where I'm going. I hobbled into town and there was Dee, at the first "chairs and umbrellas" and I was glad to be there.

We ate and drank and then Raphael walked up. We said "Hola" and he said he was heading to such-and-such alberge and I said that was the same one on the brochure that I was heading to so we vowed to see each other this time. Dee was dealing with her guy friend who had just arrived in Santiago and she decided to bus it in from there. I happily checked into my private room in the alberge and ate what was probably going to be my last pilgrim menu. Just as I finished on the terrace, Raphael showed up and we had a nice long talk over a final bottle of wine. I was teary because it was all going to come to an end tomorrow. 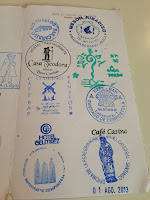 “For my part, I travel not to go anywhere, but to go. I travel for travel’s sake. The great affair is to move.”
– Robert Louis Stevenson