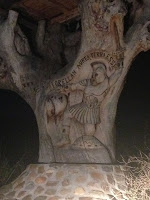 At 8pm last night, I stayed up and partied all night with Jose and Rollo until 7am; then again starting at 8pm tonight, I stayed out and partied with Jose until 4am. These 36 hours were the highlight of my Camino, bonding with the locals! We drove back to Jose's place last night and stayed up listening to music, it was so much fun. Rollo left around 4am, at which time Jose said "Wait, you're a pilgrim, do you want to do your laundry? Of course you do, si, wash everything." It was music to my ears so at 4:30am, I washed everything except my white nightgown. He was a sweetheart and even though we were making out like high school students I told him nothing was going to happen, especially on the first night. He was cute, he'd get all excited but then say "OK, OK I have to calm myself down" and he would. I was loving it. 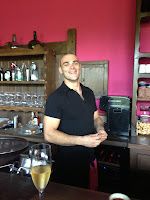 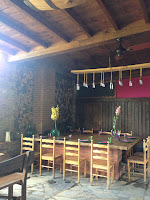 We finally fell asleep and then woke up around noon at which point he said he had to go to work. An hour later we were in his car heading to the hotel Moncloa de San Lazaro. He escorted me in and showed me where to check in and said that he'd be in the restaurant working. I went up to my darling room, took a long bath, and got ready to have some lunch. I came down and proceeded to sit at his bar and hang out with him all day long. I had Cava and then a white Albarino wine with a goat cheese appetizer, then switched to a red Mencia wine with my main dish of lamb. Lamb and goat cheese and good Spanish wine, that's what I wanted the entire trip! He then made me a divine coffee drink and I was in heaven. I loved the hotel, and I met his sister Ada who is a winemaker and the restaurant manager. She spoke English and so she and I chatted for a long time about wine and eventually she said, "You are the Vino Peregrino!" That was it, my new nickname, the "wine pilgrim," christened by a local winemaker, I was having the time of my life.

Jose told me there is a saying that each day on the Camino is like one year. When I later told my friends that, we all agreed, it felt like we had been here for years. He talked Ada into letting him off at 8pm, with the promise he'd show me their Dad's winery. I waited for him in their gift shop where I found a blonde pilgrim angel for my Christmas collection! 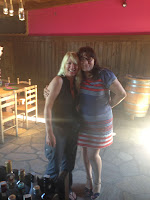 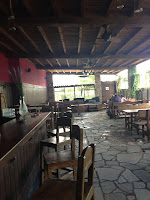 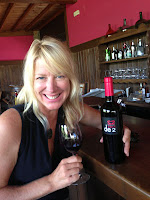 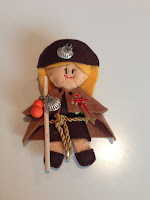 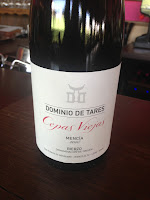 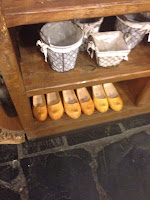 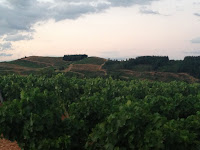 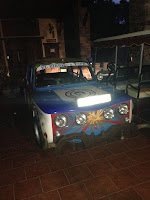 We went back to his place so he could change and get his drum and then headed into the surrounding hills. It was so much fun to drive through the adorable town of Cacabelos with him because he was driving so fast on those tiny little streets, waving to people he knew, and taking back roads to get to the outskirts. We drove into vineyards and before I could gather my wits or grab my camera, we entered a long driveway that led to the biggest winery I've ever seen, much bigger than any estate in Napa, it was more like an operation you'd see in Bordeaux. "This is your Dad's?" Si. Apparently there was a family falling out years ago when Dear Old Dad started seeing the secretary and a divorce was soon to follow. Dad re-married and the secretary had a baby boy, so now Jose wasn't the baby boy anymore. And despite several attempts to reconcile, it sounds like Dad, and everyone on Jose's side of the family, moved on. He showed me his Dad's funky car and explained how he had bought so much land between two villages that he practically owned the two villages. It's amazing, I thought, that families can't reconcile. Even Jose wasn't happy about working at the family business anymore, being the bartender. I told him I understood but that he had an awesome set up and he could do anything he wanted with it. He didn't want to have anything to do with it anymore. 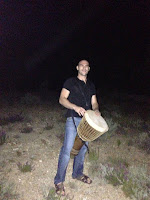 We headed up into the mountains, on a road that you could barely see unless you knew what you were doing, and he took me to his special place. Right when we got out, there was a full moon rising! It was so big and so beautiful. Jose got out his drum and started playing it while I danced along. I took a video of him playing it but for some reason, I couldn't upload it so if you want to see it, you'll have to watch it on my iPhone ;) He is good! We had so much fun, he kept saying "you are a lucky pilgrim" and I'd repeat it "I am a lucky pilgrim" and we'd laugh. He did the Camino from his front door so he knows a little of what I've been going through. And every now and then, he'd start speaking in Spanish, forgetting that I don't understand a word and I'd just look at him smiling, and then when he'd realize he'd done it again, we'd burst out laughing. 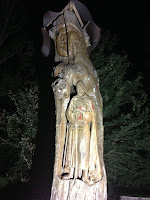 Then we drove on the actual Camino! It was 2am and no one was out and we drove the part that I had missed last night when he took me from Molinaseca to Cacabelos, namely we drove back to Ponferrada. I felt like such a rebel pilgrim it was awesome. We drove by the Castillo de los Templarios, the 12th century Templar castle which is now a national monument and open during the day and he told me how they have musical festivals there, in the big field across the street. I took some late night photos but nothing could do it justice, the feeling of being out there, off the beaten path. He said he wanted to take me to one more place and I said OK. An hour later we were at Las Mulas, a mountain that had crumbled when the Romans bombed it out with water looking for gold. It was well off the path and most pilgrims would never see it. It was spectacular. We had to park at the base and climb a steep hill and he said, "you're a pilgrim you don't need this extra work but it's worth it." I said it was fine and he held my hand the whole way. Once we reached the top it was breathtaking, there was this huge crumbled mountain under the Milky Way and a big observation deck set up to look at it. It was a good thing we had the full moon otherwise I wouldn't have seen anything. I thanked him, told him I loved it all, and we headed down the mountain towards town, talking and laughing the entire way. It was 4am by the time he dropped me off at the hotel and I knew, my special day was done. 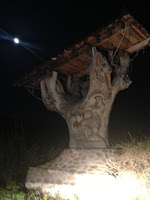 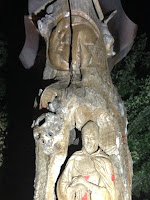 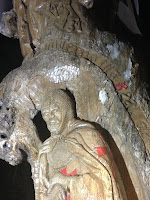 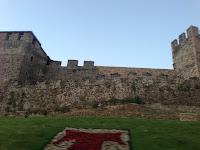 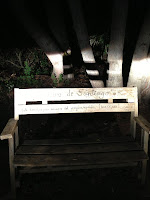 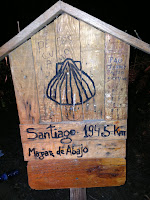 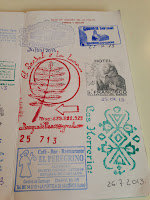 "Happiness is a mystery, like religion, and should never be rationalized."
- G. K. Chesterton