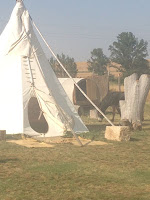 Slept in until 9am, out of the private alberge by 10am. I could tell that the owner, the Ramon character, was wondering when I'd emerge. I had asked the night before if there was a time I had to leave by and he said no, so I took advantage of it. I took another shower, went through my morning routine, gazed out the window admiring the pretty view, waved to the old man neighbor across the street, listened to the cocks crowing, and leisurely headed downstairs. He wished me a "Buen Camino" and I thanked him for the hundredth time. 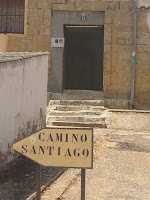 The road out of the village looked much better than the road into town. Funny how that happens. I was following the signs and taking pictures completely unaware of how far the next town would be. I liked it like that. Sometimes however, the arrows were hard to see. In fact the whole waymarking had changed dramatically since the uniform shell sign of before. Now it was random signs, tiles on homes, spray painted arrows, and old historic markers that I had to keep my eyes out for. I consulted my two pieces of paper and remembered that Boadilla was on the way, as was Fromista. These were main stop-offs that many others had mentioned and so I set my intent to go a bit further again and stay off the beaten path. The illustrious Roger from Belgium had mentioned something about a place with tee-pees and so I decided to dedicate my walk today to Rossana, my best friend who would love to be doing this with me, and headed out to find some tee-pees. 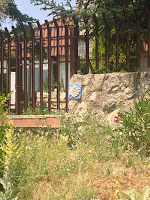 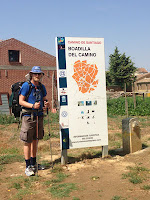 Several pilgrims were passing me, apparently ones who had started further back, gotten up much earlier, and were now several hours into their trek, including Helen and Lawrence who had a fast pace. Guy from Australia met up with me and told me Kathy had gone ahead to Fromista and they were going to spend her last night here in Sahagun. I asked how his birthday went and suffice to say, it didn't go too well. He was the kind of guy who "drinks to get drunk" and told young Brendon from California that he'll "never make it to Santiago." When he started in with similar kind of talk on The Way, I said "well that's your opinion but it doesn't mean it's true." He listened, and we proceeded to have a very deep conversation. He'd get it, and then he'd start with his old defensive thinking again and I'd call him out and say "according to you." We enjoyed each other's company for that leg and it made the time pass. At one point I had to stop and tend to a new blister! I tried a new technique I had learned from Raphael that involved cutting bandages and wrapping tape and as Guy patiently watched me he said "it's amazing the things we are voluntarily putting our bodies through." When we reached Boadilla, we shared a pizza for lunch and then I invited him to go on ahead as he was much faster than I. Boadilla del Camino is one of many towns that had fallen by the wayside over the years but is now experiencing a re-awakening because of the Camino and is beginning to turn the tide. 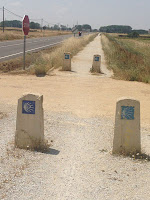 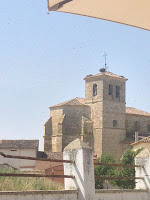 Fortified from a nice lunch, feet freshly bandaged, and glad to be alone again, I headed out to the great unknown. I realized that I was so preoccupied with avoiding the rocks, the pain of my feet, ankles, legs and butt, and looking for the arrows, that I didn't have much quiet time "to go within." In fact, this whole journey was more about "getting outside of yourself." That's right, it wasn't meditative or reflective, it was more like survivor meets summer camp. If you're ever plagued with too much thinking, go do the Camino, that will cure you. If you ever become too self-absorbed, go do the Camino, then let's see how comfortable you are in your own skin. Even though the churches and monuments along The Way reminded me of the spiritual history here, it was hard to tap into it with all of the physical challenges. In fact I thought of them instead as reminders of religion and relics fashioned to perpetuate lies. I had long ago renounced formal religion, opting to "embrace all and follow none" and turn my direction away from man-made things and focus instead on God-made things. Fortunately I had seen my share of churches when I lived in Europe in the past and I admired them then, now I was more interested in the factual, historical context and its relevance to the Camino. The religious doctrines and beliefs, such that when you get to the Mountain of Forgiveness, all your sins are absolved and you get an indulgence so you don't have to spend a longer time in purgatory... really? 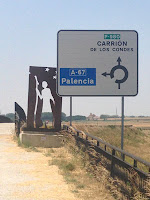 My relationship with God is within myself, within other people I see, and everywhere I look in nature. To me, God is everywhere and religion is a middle man. As Liz Gilbert says in Eat Pray Love, God dwells within you...as you. God's not sitting up in the sky with a silver beard and birkenstocks, watching a performance of how a spiritual person looks and behaves. God is here. God dwells within me, as me. Even science is proving divinity with the discovery of the Higgs Boson, which basically means that physics isn't only reductionist theory, there is an emergent element that sparks life. I realized that most pilgrims said they were doing the Camino out of some sort of spiritual belief but that no one had really talked about it, other than Bob from Arizona, a devout Catholic, and Ben the ruffian from Paris who surprisingly was about as religiously brainwashed as they come. It seemed like most Europeans here were garden-variety Catholics, they were Catholic because they were born into it and because everyone else around them was. I imagine if pressed however, they would still believe in many of these man-made doctrines, more by way of habit. Such as it is, like the Camino, everyone has his or her own religion. 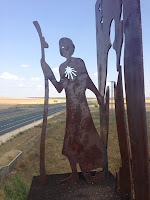 I read that Fromista marked the beginning of stage VII of the Codex Calixtinus. OK, and according to my paper from the Pilgrim Office I was in stage 17. It seemed everywhere the distances and elevations were listed differently, so much so that it started to become a joke. After town, the nature path turned into what is known as a "pilgrim autopista" - the soulless (senda) path that runs alongside the main roads. I had now entered the region of Palencia. I liked reading what I could about it on the information boards (even though they were mostly just in Spanish). But talk about confusing! Apparently there were "alternativo" paths and since I couldn't follow the cryptic signs explaining them, and since I didn't have a guidebook to assist me, I just followed the yellow arrows. Fortunately they took me to Villamentero de Campos and the tee-pees were in sight. 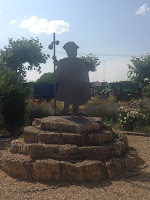 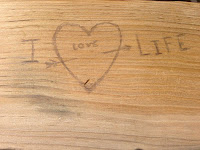 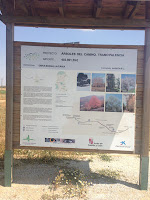 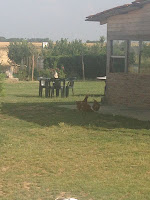 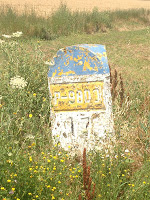 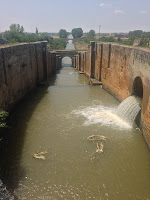 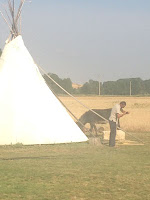 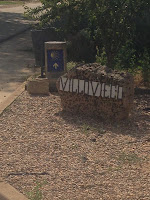 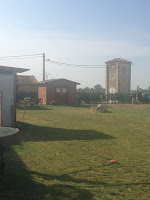 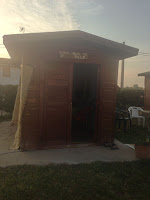 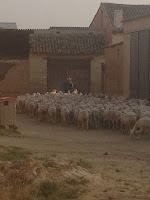 I came around the corner and made my way into the only outfit in town, in fact, I'm not even sure if there was a town, if so, it was on the other side of some extremely old looking buildings. I crossed over the grass and around another corner to come upon the restaurant and the alberge office. It was classic. Out of this world. There was a donkey who was so tame, he was hanging out on the terrace and it looked like he was literally busing tables, and the chickens looked as if they were playing hide-and-seek with each other. I soaked up the scenery, glad to be done with my 26 kilometers for the day, noticed that I didn't recognize any of the guests, and went inside. The guy was really nice and he showed me a tee-pee but it was all wet from the storm last night, so I inquired about a cabin and he explained that one was still available but I would have to go inside to use the shower and bathroom. I looked inside where the bunkbeds were situated and saw that they were right next to the communal bathroom and smartly decided to take the outside accommodation. 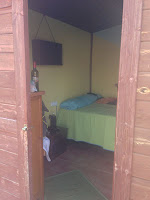 Once I got back out there I thought "what have I gotten myself into" but instead of spending too much time thinking about it, I went in for a shower. Terrible shower here - flimsy curtain, lukewarm water, no pressure, co-ed - I decided not to wash my hair. Once I changed and went back to the restaurant, I joined about six others for the communal meal. There was Bob from Arizona and his new friend a Japanese guy. There were a group of three from Australia, who work at The Ivy in Sydney, and there was me. The guy fed us beans, and then more beans. And then later that night, I was so glad I wasn't near the bathroom because apparently they didn't sit well with any of us, but especially Bob and the Japanese dude. We also had the usual mixed salad, dessert, and all the wine you wanted, but too many beans. I vowed to be more careful in the future. After dinner, the guy showed me where I could wash and dry my clothes (hooray!) and just as the guy and I were jerry-rigging the dryer to stay on and taking a few puffs, a local shepherd came up the street with his huge flock of sheep and ushered them in for the night. In the end, I loved my little cabinita, it even had a candle. I set my alarm for 2am and then went outside to lay on my sleeping bag and gazed at the most amazing sight yet... the Milky Way. 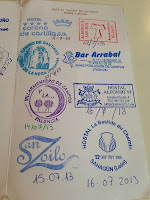 "I firmly believe that any man's finest hour - his greatest fulfillment to all he holds dear - is that moment when he has worked his heart out in a good cause and lies exhausted on the field of battle - victorious."
- Vince Lombardi