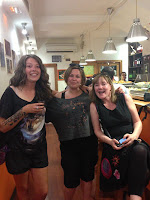 Up at 10am, checked out of the hotel by 11am and no dry heaves for the first time! I had already decided to stay another day in Logrono to rest and enjoy the local flavor of this charming city. I left my broken green backpack in the room and my green yoga mat (abandoned items 17-18) and headed up to the Logrono Carlton Hotel where I would share a room with Dee, Anna, and Anton. We were all happy for a day of rest! Anton felt my pain because his pack had broken too and he was extra sore because he was going too fast. They all admired our new packs as I was setting out more items to be abandoned including one of my favorite cotton t-shirts, my clothes line, and my two pair of woolen socks (abandoned items 19-22). 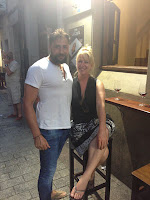 I put on the only skirt I had, my black top, the pretty jade necklace I brought, and my flip flops. We immediately set out for afternoon drinks which turned into a tapas / pub crawl and our group gathered force as we met up with friends of friends and a few locals too. The top picture is Anna from Denmark, Dee from Ireland, and Alexis front Scotland. Then there's the picture of Erin from California with Juan from Spain (he's a local, not a pilgrim, and he's the one Anna made out with later :) We also saw Robin from North Carolina, Crystal from Colorado, met Elias from Switzerland and a cute, older Australian couple. The food was phenomenal!! Especially the mushrooms and the potato bravas!! So much fun, the streets were packed with people enjoying the best food and drink yet!! 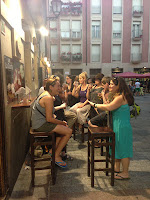 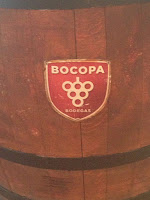 The older Australian man was a wine connoisseur like myself and so we started talking about wine. I explained how surprised I was to find no bodegas along The Way, no places to do a wine tasting to learn about the varietals of Spain, and no one who was really interested in explaining the wines to someone like me. He said he met a wine aficionado earlier in the day and perhaps she could help us. We set off around the corner to a lovely, dark restaurant and met the proprietress. She showed us her Vinological Certificates prominently displayed on the walls and I praised her for her studies but asked her about a tasting. She said "NO. That's not how it's done in Spain." I tried to tell her now that I had passed through the Irouleguy and Navarra wine country that I would very much like to taste the different Rioja varietals including Alta Rioja, Baja Rioja, and Alavesa Rioja so that I could learn about them and distinguish their characteristics. "NO" she said, "that's not how it's done in Spain." The Australian man and I looked at each other with obvious frustration and I said "I will pay" but another "NO." So I ordered a glass of her most expensive Alta Rioja and another glass of her cheapest and lo and behold, they basically tasted the same. So maybe that's why it's not done like that here, because they don't taste that different. If only I could've sampled more varietals! Talk about a business opportunity.

Many hours and many drinks later, we headed back to the Hotel. Anna and Dee had their own single beds and I had to share the double with Anton, who informed me that tonight it was my turn to snore. That's what happens sometimes if I drink a lot and tonight, I definitely drank a lot! Buenas noches peregrinos :) 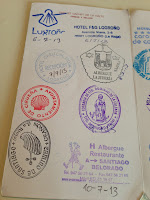 "If you follow your bliss, you put yourself on a track that has been there all the while, waiting for you, and the life you ought to be living is the one you are living."
- Joseph Campbell