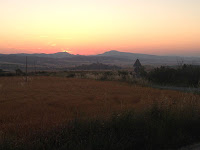 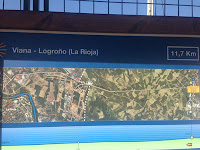 Up at 5am, out of the alberge at 5:30am, I was the first one out. I smiled to myself in the dark and thought now that I've done that, I'm never doing it again. It was chilly and the first hour was downright cold but I must say, the sunrise an hour later behind me was spectacular and I was feeling good. Destination Logrono and a hotel room, I was stoked, and I was finally crossing over into the La Rioja wine region.

But then inexplicably, it all started to go wrong. 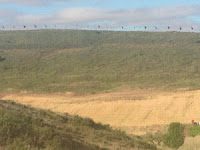 I was happily walking along, proud of the fact that I beat everyone else out the door and still out there on my own, when I came across a couple of young ruffian looking dudes who turned out to be two nice boys from Belgium. I tried to keep pace with them for awhile and that must've been my undoing. By the time I arrived in picturesque Viana, my legs and specifically my ass, was so sore it was a pain unlike anything I've ever felt in the lower half of my body. I've had pain like that in my back (I have a lower back condition but fortunately my back wasn't bothering me at all) but never in my feet, legs or butt. It was nothing short of agony. So I stopped for a morning Cava and this is when I met Rafael from Spain. I had seen him before but we introduced ourselves outside of the cafe. I also came across Jenn and Phyllis from Connecticut who informed me they were staying in Viana and bussing it to Logrono due to aches and pains. Phyllis said her feet felt like bloodied stumps. I told her I could relate! 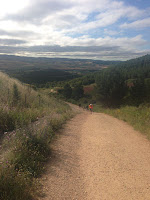 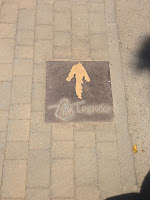 The path was steep today and most of my people ended up passing me, including Anna. A few hours into it and I was in excruciating pain. Apparently the hip flexors (butt muscles I never knew I had) get sore because of the backpack and so one is supposed to take smaller steps. By the time I crossed over into the wine-producing region of La Rioja, I could barely walk! My right ass cheek would simply go no further.

I stopped off on the side of The Way when Shai found me and gave me his stick. I was "hurtin for certain" and it helped a lot. He was my angel that day! All I could think was "get to Logrono, get to Logrono." He went on ahead and as soon as I got up and swung my pack over my back, SNAP, the strap broke! "Holy shit" was all I could think to say and there I stood alone, half mad, half sad and totally frustrated. How quickly my mood had changed. I was literally coming apart at the seams! It was all I could do to hold back the tears and keep walking ahead. "Just keep walking, just keep walking..." the Finding Nemo tune of "just keep swimming" was the only thing repeating over and over in my mind and it was making me even more annoyed. Roger from Belgium had explained that there are stages of the Camino: first the physical pain and then the emotional struggle, then there is the stage where you think about who you care about, and lastly the stage where you realize who really cares for you. I was clearly in the physical and entering the emotional. 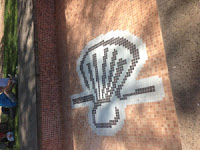 By the time I descended into the environs of Logrono, I was taking
the shortest, slowest steps of my life. Other pilgrims obviously took pity on me and asked if I was OK. I said yes, what else could I do, even if it took me all day, I had to get to a place and then rest all I wanted there. The outskirts of the city were ugly, there were no cutesy wine-tasting bodegas or cutesy little Spanish cafes, just industrial office parks that were seemingly abandoned. I didn't even know what day it was. And as usual, the last three kilometers proved almost to be my undoing. I barely made it to the pilgrim fountain where I took my shoes off and soaked my feet in the healing waters. I saw another pair of ruffian type dudes who I immediately liked, but not wanting to waste another minute, I headed across the bridge which was just brutal. I thought to myself "tomorrow I'm going to walk back over this bridge like a normal person." I checked in at the first hotel I saw just on the other side, the lovely Hotel Logrono. 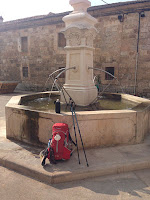 The moment I hobbled in, I was greeted by Alexis from Scotland, who had obviously sent her bag here ahead and was speaking a mile a minute to me while I waited in line. I had no patience; I just wanted to check in and disappear for awhile. I was in one of the worst moods since the third morning when I was kicked out of the monastery into the wet morning with my period. I tried to be nice but I finally turned to her and said "Listen, I cannot talk to you right now. I am in pain and I am praying they have a room for me because I literally cannot take another step." She got my drift and backed off. Fortunately they did have a room and I was able to go to it right away. In the ten minutes it took me to get there and unload my gear and take my shoes off, I felt bad about snapping at Alexis so I went back down to the lobby and hung out with her for another hour. Then it was straight to the bath tub and a nap. I think it was the first actual siesta I took.

By the time night came, I headed out to a sports store and bought a new backpack, as well as a new bra, two new pair of socks (I had brought wool socks, what was I thinking!), and a lightweight, long sleeve shirt to protect me from the sun more than for the warmth. I headed back to the hotel and by the time my dinner came, I was too tired to eat it so I took it up to my room and ended up having my steak dinner for breakfast the next morning, which in hindsight turned out to be a good thing since I spent the next day partying all day with my friends. A bunch of them were out and about enjoying the culinary capital of Spain but I was just too spent to join them. All in all I had done 21 kilometers today but it was the fourth hardest day for me, so I told them I'd make it up to them tomorrow.

"When you meet anyone, remember it is a holy encounter. And as you see them, you will see yourself."
- A Course in Miracles