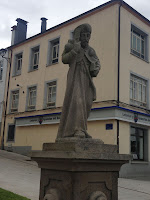 Woke up at 8am, out of the pension by 9am, Roy had already left and Dee was in no hurry. I could tell by the look in her eyes she was ready to bus it again. She had some kind of motive to go to Gonzar so I went along. We had a leisurely walk thorough beautiful Sarria and stopped in at a pilgrim shop. Sarria was a major medieval center for pilgrims and the ancient atmosphere can still be felt in the attractive old quarter where our pension was. It is also the starting point for pilgrims who just want to do the last 100 kilometers to get the compostela at Santiago. As such, there was an influx of 'city pilgrims' as they came to be known. We headed down to a hotel, found out that no buses run on Sunday, and were directed to the taxi stand. 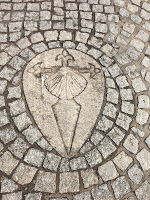 We set off for Gonzar in the cab. She wanted the cab to "drop us off on the outskirts of town so no one would see us," I said "please" in my best puh-leeze sarcastic tone. I didn't care if anyone knew I bused it or cab'd it or got a ride here and there. I told her "a loving pilgrim welcomes all they meet along the path" and she said "I don't mean to be rude but shut the F up" and smiled in good jest. That's the way she was :) and so that became the quote of the day. When we arrived in Gonzar, no one saw us get out, so she was happy again and we set off to find one of the two alberges in town that some guy was going to be staying at. "Ah ha, that was the motivation, I should've known." Once we checked into a nice, old building with wooden beams and large dorms with clean beds, we headed up to the cafe so she could get Wi-Fi. 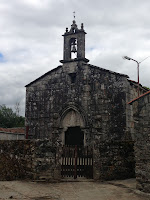 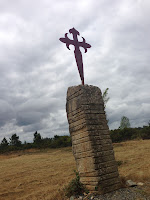 I went inside to order and there was Raphael from Spain, always a wonderful surprise. We sat outside with Dee awhile and then he went into the other alberge for a siesta. I was about to head back to my bunk for my own siesta when Dee found out this guy had gone on to Palas del Rei and she wanted to motor it forward. "Really" I said? "He's that worth it?" Apparently so. So I reluctantly packed up my bag again while she called another cab. We hopped in and sped off and I wondered once more if I'd ever see Raphael again.

Once we were almost to Palas del Rei, Dee realized she lost her iPhone. Good grief, the drama of the day started compounding. Instead of going directly back, she wanted to check into the alberge and find her friend so we did that first and then tried to figure out where she left it from there. Long story short, we finally talked her into going back to the previous alberge in Gonzar because it had to be there, and thankfully it was :) Out of the window on The Way, I could see busloads of 'city pilgrims' and realized the Camino's become touristy.

We taxi'd a total of 43 kilometers and she never hooked up with the guy, the whole thing turned out to be a bust.  I was low on energy so when she came back with hamburgers and red wine, I couldn't even finish mine. I took a long shower - great shower here, private in our own room - put my ear plugs in and tuned out. 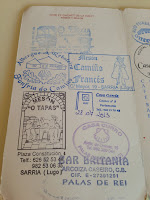 "In hoc signo vinces - In this sign thou shall conquer."
- Knights Templar