Up at 8am, out of the hotel by 9am, with Dee who came to wake me. She had a package to mail for Robin and I had mine so we headed to the post office. Easy directions from the concierge but difficult to find, with all the curvy streets, foreign words, and city bustle. We passed it a couple of times, not realizing Correos is the Spanish name for La Poste. Finally inside we were greeted with the usual kind of rudeness the service people continue to display. It makes Dee furious but I don't mind too much. I figure I'm a pilgrim here on their land, let them be. We finally left the post office in Pamplona around 10am, and to think we made it all the way to Puenta La Reina tonight and partied, what a day! 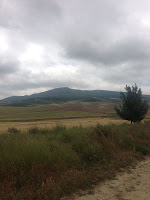 Dee and I left Pamplona together and found tea and coffee at a cafe on the outskirts of town. Once we were fortified, we walked past the University and up to the Knights of Templar alberge and the 12th century Romanesque church in Cizur Menor. She was having aching feet and told me to go on ahead. My Compeed was working like another miracle, and after my lovely night's sleep, I was ready to tackle the mountain. There was a huge incline today, from 400 meters to 800 meters and back to 400 meters down the other side of it. She assured me it was fine to go ahead and so I did. I started on a long, dirt road through the meadow and up the mountain. I felt great in my new clothes and out there on my own again and I thought to myself, the Camino already feels like a pilgrimage. 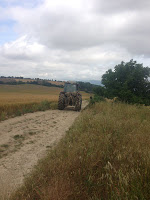 I am getting stronger and I have more courage than I thought. I am shedding my things. Even if I think I can do anything, I still have to prepare for it.  All of these thoughts kept running through my head but I find that I can't really focus on any one too long because I have to focus on the world outside of me. Ahead of me I can see a range of hills and a steep climb up, to then pass through a settlement of wind turbines looming in the distance. I can see the windmills next to the big landmark of the day, the Hill of Forgiveness (Alto del Perdon), with a series of large wrought iron sculptures of medieval pilgrims, heads bent to the west wind.

It is ironic that on the way up, all one can do is look down, in every effort to avoid as many rocks as possible. There are rocks of every nature: you have the embedded ones with jagged edges that stick out leeringly; you have the large loose ones that give way and roll underneath each time you angle down on it wrong; you have the smaller rounded ones hiding, that if you happen to step on it with the bullseye of your big toe bone, you are limping for an hour; you have the pebbles that lie beside the tractor grades caked dry in the mud; and let us not forget the shales of granite jettisoning out of the earth. It takes a dedicated pilgrim to actually stop and look up and around now and then.

The climb up provided stunning views of Pamplona behind me. I looked behind and I knew, I had completed the first hurdle in my mind - getting over the Pyrenees mountains and through Pamplona. Once I crested the summit, I could see the view west over the Arga valley and all of the villages I would be passing through became visible far below.  I thought to myself "wow, now I know what it is like to climb up one side of a mountain, climb down the other, and then walk through a huge valley." I met up with a few 'tourist pilgrims' they called themselves, Spaniards from a nearby town just out for the day with their friends. I also met Diego from Mexico.  The climb down was a very steep descent and my legs were crying. The loose boulders were so frightful I had to take a picture of them! My feet, oh my poor feet, and my ankles, I had a new pain. My calves had shin splints, and my thighs were burning, they've never known this kind of workout before. And my ass, I was starting to feel muscles I didn't even know existed. And to think I wanted to do this barefoot (what was I thinking!). 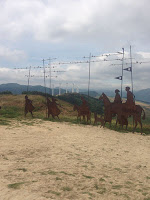 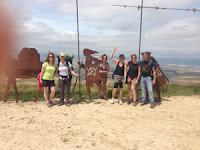 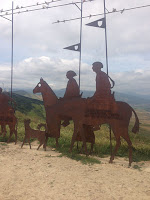 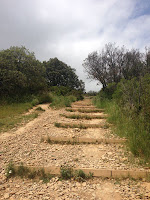 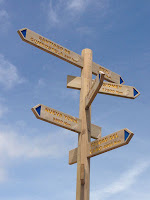 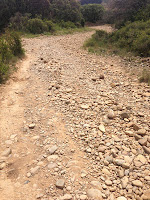 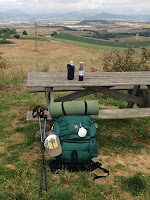 Once I reached the bottom of the crest, the land opened up and became rich red earth and almond trees. The path wound around a ridge running parallel to a quiet country road that led to the town of Uterga. I headed for the first little grocery store, bought wine and saucisson and proceeded to the picnic table to take off my shoes. It was here I met Philip from Spain and had a lovely talk. He took off and I waited for Dee to arrive. When she came, we rested longer and then walked through the town by the local Camino del Perdon alberge and then down into the valley. We still had 7 kilometers to go if we were going to make it to Puenta La Reina. We were going on a suggestion by Roger from Belgium to stay at a particular alberge at the far end of town so we'd rendez vous there. I had the faster pace today and off we went. 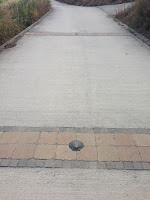 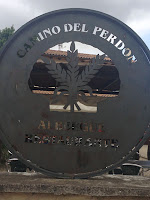 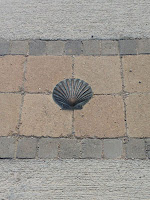 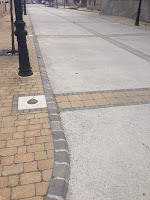 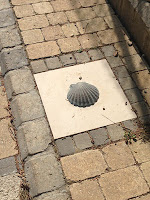 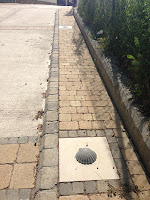 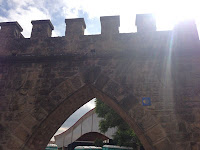 The small town of Obanos was beautifully ornate. There was a large church and a cloister in the historic village, and all along the roads and sidewalks were scallop shells marking The Way of the Camino.  It was a gorgeous afternoon walk but totally painful. Many pilgrims along The Way were starting to limp and hobble along. I kept running into the Irish family of a Dad and two daughters and one of the daughters had a bad knee. I walked with her awhile and by the time I got to the bridge in Puenta La Reina, once again I was hobbling in too. 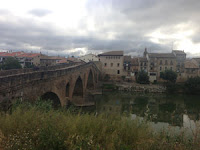 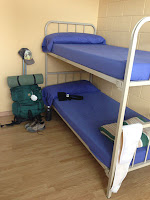 The main alberge in PLR is at the beginning of town, actually I'm noticing that a lot, that the main alberges are at the beginning of town. I saw Anton there and told him Dee and I were going to the other one but he was so tired he couldn't walk a step further. I shuffled through the narrow street and admired all of the shops and cafes along The Way. It must be post-siesta, I thought as people were out and about having a good time. Then after what seemed another couple of kilometers, I reached the end and the bridge out of town. There I was told to cross over and climb up the hill and veer to the right. "Keep going, it gets really steep, and keep veering to the right" is what Roger said. So that's what I did. What a challenge, it was so steep I was literally taking the smallest steps you've ever seen and angling my walking sticks for support! Finally I arrive and there is a large, modern building with a swimming pool. I walked into the big main entrance and dining hall, and checked in with the warden. He spoke French so I was able to communicate. I paid my 10 Euro for the night and 10 Euro for the meal and set off to find my bed. 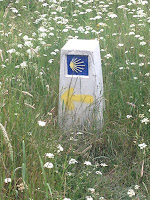 The communal dinner was served in the large hall and I sat with Shai from Brooklyn and met Jorge and Brendon from California. I also reconnected with Lauren from Washington. There was a large, loud group of Brazilians there traveling together. Afterwards we all went outside and Jorge started buying bottles of wine. Dee showed up hours later, having first partied with her two new favorite German men, and arrived with Esther and Yenny from Holland. We all sat outside drinking wine and telling stories and that's when we met Guy from Australia and Kathy from Switzerland who, met on the Camino last year and got married, and now live in Sweden. It turned out to be another fun late night and finally the warden insisted we go in and head to bed. It was the first night I arrived at my destination and didn't take a shower, kinda gross I know, but such is the life of the pilgrim.

"We are speeding up our lives and working harder, in a futile attempt to slow down and enjoy it."
- Paul Hawken