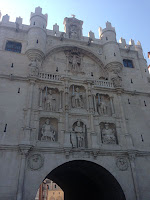 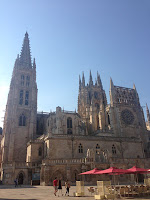 All I remember is the dark, quiet, clean sheeted, non-creaky bed, and the deep sleep I had apparently fallen into. When Anna tried to wake me at the crack of dawn, I said "no thank you honey, I'm not ready to leave yet" and with that, rolled over. She silently departed and I fell back asleep. I stirred a couple of hours later when the last of the peregrinos were making their exit and saw Dee still sleeping on her top bunk and thought "that's it, I'm not getting up until she does" :) And so it was, a glorious sleep of almost 12 hours. Clearly I needed it. We finally roused, had the place all to ourselves and slowly took our time getting ready. That's when she said she wanted to bus it to Burgos. Without a second thought I said that was fine with me. My body was lethargic after my slumber and I was in the mood to chill out.

I knew we were going to bus into Burgos at some point because of the urban sprawl, but I didn't think it would be today and I didn't think we'd bus two legs. I found myself not caring one bit. We practically skipped into town and found the local tourism office to inquire about the autobus. It was like 11am and this one cafe owner was packing in his chairs already closing. Unbelievable. We found a supermercado and I stocked up on my usual wine and saucisson and pastry and proceeded to a darling park to wait. The bus picked you up at an intersection. There was no sign, no nothing, so we waited. Eventually a few others began milling around and we knew we were in the right place. 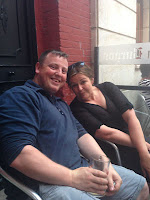 It was a delightful hour spent watching the locals in their native habitat. Cute families, cute couples, the locals in Belarado were friendly, saying "Hola" to us, and "Buen Camino." Actually it was the people in the street who were friendly, but the shop owners and the cafe owners and the grocery store clerks and the mail clerks and the bar servers and basically the whole service industry, those people were still pretty rude. They were VERY rude according to Dee's standards, and even I have to admit, it was like France in the 80's, they were unaccommodating, unwilling, and unfriendly. Case in point, as soon as the bus came, Dee saw Elias from Switzerland and briefly hugged him and the bus driver had a hissy fit on the street claiming she was holding up the entire schedule. Spanish soap opera. That kind of thing. 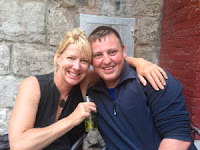 We bussed 51.5 kilometers today, through Villafranca Montes de Oca and St. Juan de Ortega, and arrived two blocks from the hotel Dee booked for us. From there it was an easy walk over the bridge to the 13th century Cathedral de Santa Maria, one of Spain's largest and most beautiful cathedrals. Essentially Gothic, it combines many styles having been "embellished" over the centuries. And of course when we get there and want to go inside, it's closed. 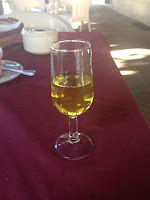 Dee went to find a sports store while I stayed in the room and had a check-in call with my Mom and a long bath. Once she was back, we headed out for dinner and to find Anton, who apparently had been seriously injured in a fall where he tore the ligaments in his ankle! After countless texts, on their behalf, we finally connected and hung out trading stories in the vibrant city of Burgos, drinking what was now affectionately known as "radioactive." It is a local liquor called Patxaran that tastes like anise flavor and looks neon green. Like Joost says in the movie "it's made of 18 different herbs and they are so secret that they have to be squeezed by blind monks." I tried to explain to Dee that it is a digestif, meaning you only sip one glass after dinner, but she was having no part of it. I pried myself away from the party, intent on getting up early tomorrow and heading into the next phase on my own: the Meseta. It had been fun with Dee but I was ready to finish what in my mind was the end of the second phase, getting to Burgos! I was also ready to head out alone again and since she planned on staying another day in Burgos, it worked out for all. Except for poor Anton, who had to go home due to his injury, we'll miss you :(

"Faith is an excitement and an enthusiasm: It is a condition of intellectual magnificence to which we must cling as to a treasure... one that should never be squandered."
- George Sand