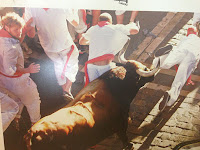 Up by 8am, out of the alberge by 9am with Dee. We had a mere 3.5 kilometers to make it to Pamplona today so we took our glorious time. Back in the main square at the Cafe Paradiso, we ordered coffee and tea and yummy pastries. Our theory of only the men being out and about at this time held true. We headed out of town and into the suburbs of Pamplona. There were funky industrial buildings along The Way and we had to keep a watchful eye for the yellow arrows once we entered the city limits. After walking through the suburban parts of the city, we reached the bridge and the medieval part of town. 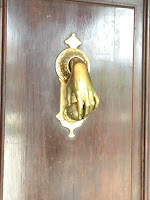 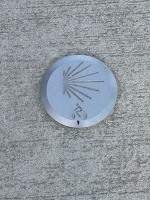 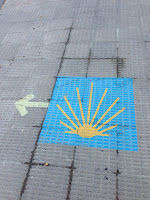 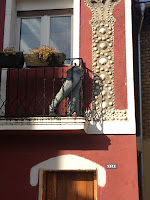 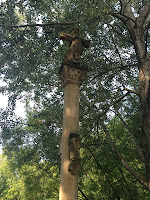 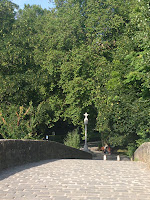 There is an ancient stone cross with a relief of St. James as a pilgrim atop the scallop shell on the magnificent medieval bridge that stands as a gateway to this historic city. Dee turned off to the left toward the alberge where Robin was staying and I headed into the gates of Pamplona to find a hotel. After roaming the streets for awhile looking for an "H" sign, I finally asked at a cafe and they pointed me in the right direction. It was only 11am when I checked in; I promptly took a long bath! 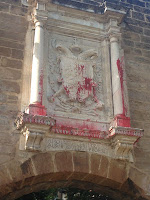 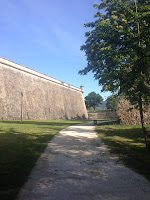 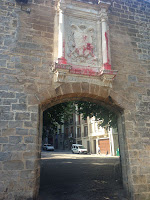 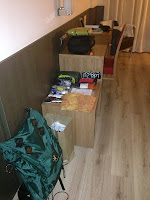 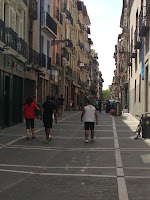 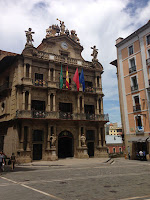 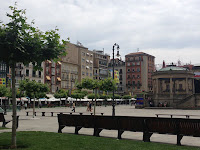 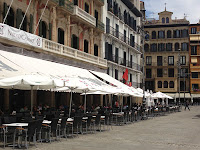 The rest of the day was spent roaming around Pamplona, what an amazing city! You can tell it is a vibrant university city with the old town at it's center. The Camino goes straight through the old part of town, and coincidentally, is also one of the roads where the running of the bulls takes place. The Festival of San Fermin was set to start the following weekend and the city was already getting prepared. I thought about staying to watch it but realized it would be too long to stay in Pamplona. The saying here isn't that Ernest Hemingway made Pamplona famous, the Spaniards say it was Pamplona that made Ernest Hemingway famous. Cute. 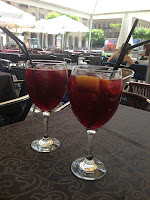 I was happy to be an incognito pilgrim for the afternoon and I put on my flip flops and the only skirt I brought and headed to the main square. The conceirge at my gorgeous hotel told me there was an eco-laundry mat in the square so I packed up my dirty clothes and went to find it. It was great, I put everything in and waited for the machines to run their course while I sat out front and had yummy red sangrias with Dee.

We saw a group of our extended family in the square, and I met Alexis from Scotland. We decided to veer off the pilgrim menu and order real food, I had mushroom gnocchi. Then Dee came with me to the pilgrim sports store (the only other one I've seen since St. Jean Pied du Port) and I finally bought the synthetic type of clothes I should've purchased from the beginning! I got two pair of lightweight, quick-dry pants; three wicking short-sleeve tops; one long sleeve top; and a proper jacket (I had brought my Lululemon yoga jacket which was heavy and slow-drying). I went back to my room, unpacked everything, reassessed, and repacked. 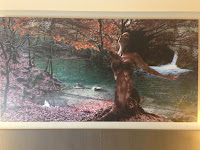 My room had this lovely painting in it of a woman emerging from the dirt and river and that was exactly how I felt. I took another glorious bath that night (my legs were killing me unlike anything I'd ever known!) and set aside a bag full of items which I knew I would have to mail back tomorrow, including my digital camera. I learned how to pinch-and-expand and zoom in while taking pictures on my new iPhone and decided that would suffice, thank you Robin Reed!! I also unpacked my Tempur-pedic camping pillow (it was heavy and bulky and all the alberges had pillows) and another assortment of clothes including one jacket, one long-sleeve top and another pair of pants (abandoned items 13-17). I called my Mom for a check-in and had her in stitches with my stories. I told her it was WAY HARDER than I could've ever imagined and that it was NOTHING like the movie! There was some kind of Spanish party going on downstairs in the street so in went the earplugs and out went the lights on Pamplona. I liked having my own hotel room.