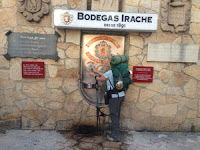 Up at 7am, left alberge by 8am with Lauren heading to Irache and the wine fountain! We first stopped at the cafe by the handball court for coffee and tea and pastries, and wished Yenny from Holland a Happy Birthday (I think he was 54) - he and Esther were headed straight to a hotel for the day and night to celebrate :) It was also Guy from Australia's 50th birthday in a couple of days; he and Kathy planned to celebrate before she would go home early and he would stay to finish the Camino. 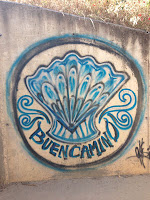 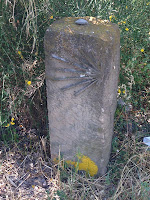 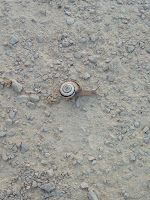 I had completely forgotten that this morning the walk was leading us to the highlight of the day: The Wine Fountain! One of the wineries (bodegas) cleverly installed a wine fountain at the gate of their grounds and people from all over would visit it and fill up their bottles. I didn't have a spare bottle with me (bad pilgrim, note to self: must always carry some kind of wine bottle on my being!) so I drank from the communal cup while Lauren snapped a photo. Good times! 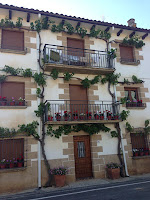 The path passed by a few fancy hotels and then turned natural again, just like yesterday's path. The first section was dominated by oak trees and pine trees as we winded our way up to the first town. There were magnificent views and as always, my regular companions showed up: butterflies of all colors, bees, and the little swallows, known as sky scissors because they miraculously appear each time you reach a small town and they dart about overhead unlike anything you've ever seen. It's uncanny and I loved it. There were also a lot of snails along The Way. They say that we pilgrims are like snails because we are carrying our homes on our back, and presumably because some of us shuffle along so slowly. I took a picture of one of the beautiful creatures with his pantheistic shell gleaming in the bright sunlight.

Except for the morning mist on the third day, so far we'd been fortunate with the weather but it was turning warm. Apparently there was a heat wave coming through Spain, which made everyone want to get up as early as possible and get going so as to finish before the afternoon scorching sun. Everyone but me. I didn't want any set rules and I especially didn't want to think about having to get up early every day. The heat doesn't bother me anyway. I wanted to go with the flow, walk as far as I could each day, and see where The Way takes me. But it became clear, I was in the minority.

The object of everyday became the same: Wake up as early and as quietly as possible, walk as far as you can avoiding as many rocks as possible, find food, water and shelter, then tend to your feet and dirty clothes, and finally sleep. It was actually turning out to be a much more social event than I would've ever realized. In fact I hadn't had the chance to do yoga again and I barely had time to make notes in my journal. As I was starting to realize, the mornings are the worse but then it gets better as the day goes on, by the afternoon I feel pretty good again (except for my poor feet!), and by night time we're all eating and drinking and settled in, it's great. It was the opposite of my life off of the Camino where I like mornings, I am full of energy and creativity and I get a lot done but as the day goes by, the stresses and strains of life can bog you down so you're exhausted by night. Like I said, here it was the opposite. 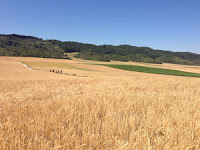 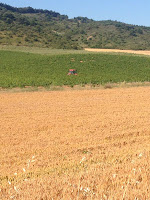 By now my left blister had healed but a new ghastly one was forming on my right big toe. I immediately applied a new Compeed and prayed for the best. After the wine fountain it was straight uphill to Villamayor de Monjardin, a lovely town with ruins and a splendid view of the surrounding countryside. The next town was Cruce, where pilgrims coming from Luquin merged in (there are nine main Camino routes one can take to get to Santiago), and then a long stretch of uninhabited countryside of farmland and vineyards and olive trees. There was no shade so when I finally reached the end and turned a corner, I joined dozens of others who congregated in the only forest setting around to rest and refill. I hung out with Brian from Ireland for awhile and took a sip of wine from Shai's water bottle full of wine. There were a group of Italian lady pilgrims who were all flutter over how good it felt to use "Shai's stick." We were cracking up.

Then, somewhere between there and the next main town, I got lost. I missed an arrow and ended up crossing over a main road and heading into a town when a local woman in a car pulled over and said "NO" and directed me back up the hill. I retraced my steps, mad with myself, and eventually found the Camino again. It was a good extra five kilometers out of my way. Must pay better attention, I told myself. The next main town was where most people were planning to stay: Los Arcos. I was walking through open country and remote vineyards. There was little shade but each small town you walked through was absolutely idyllic. Everywhere there are fountains to refresh and hydrate the body, and in one of the ancient cloisters, there were fish circling the stone fountain, which is symbolic of Christian life. Los Arcos was a sleepy town, with the usual square called Calle Mayor, and as I walked through it, I couldn't help feeling like I was in another time and space. The local church, which was embellished in the 16th, 17th and 18th centuries had added to the original Romanesque architecture, Gothic, Baroque and Classical elements, and it looked a bit hodge-podged but somehow retained an overall harmony. The bell-tower and peaceful cloisters were right out of a novel, and the sumptuous interior had a fine statue of Santiago Peregrino. I ambled through town and came across Jenn and Phyllis of Connecticut and Esther #1 from Holland. It was already nearing 6pm but I told them I was going on another 10 kilometers to get to Torres del Rio. I gave them all a hug, filled my water again, and headed out alone on a natural path of dirt tracks through farmland. 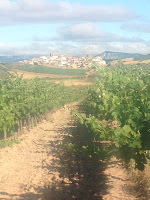 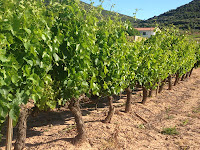 Once I could finally see the town of Torres del Rio in the distance, I knew I would make it. "I can do this" I thought, until I reached the gates and it was straight uphill into the town from there (why do they do this to us!). I climbed and climbed until I reached the first alberge and there were some of my people, lazing out front drinking beers as I hobbled up. They were genuinely impressed and started applauding me. Jorge stood up and said congratulations and promptly handed me a glass of wine. I think many of them underestimated me. I ended up walking 28 kilometers today! As soon as I saw Anna from Denmark I gave her a big hug and she told me she was staying here and the showers were good, so I checked in and got the last bed. I was beneath Diana from Hungary who had a heat-rash on the back of her legs, like many pilgrims from northern countries had suddenly gotten. We were the only ones in the dorm so I told her to apply the aloe gel she had in her first aid kit, and take aspirin and rest, and find a Farmacia tomorrow. I left to shower -decent shower here, private and it locked - and then changed and headed down for dinner. 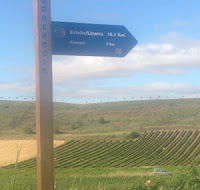 I spent most of the night talking to Anna, we both had so much fun, and she was telling me about how she had to help an injured pilgrim who fell down the side of a mountain and wait with him and his friend for an ambulance to come! She also told me she got a job offer back in Denmark so we toasted and celebrated! She and I spent time before dinner talking to Marty from Australia, the "most fascinating person" I met on the trip. He was handsome in a rugged kind of way, in his 50s, in excellent shape, and happily married with 2 kids (the wife and kids had gone on to do the last 100 km to Santiago and then go on another trip while he finished the full Camino).


He was telling us that one of his goals is to scale the seven summits, explaining how expensive it is ($50k to do Kiliminjaro; $80k to do Everest) so he spent four weeks at a base camp to see if he could even handle it. While there in the first week, he saw one guy cough up part of his actual lung (the sherpas sent him home) and by the fourth week he said he was so constipated because of the lack of oxygen that his organ functions were beginning to shut down. At that point the sherpas gave him a long spoon and said this, or go home. We were like "what, a long spoon, what did you have to do with it..." Well, it turns out he had to scoop out his own feces! We were like "what, oh my God, why, why would anyone want to put their body through such extremes" and he said it's all about the challenge. Forever changed, Anna and I thanked Marty for his stories and we three headed off to our pilgrim menu with the other usual suspects: Jorge and Brendon from California, Guy from Australia and Kathy from Switzerland living in Sweden, Brian from Ireland... and Lauren from Washington and Anton from Ireland even though the last two were staying at the only other alberge in town. 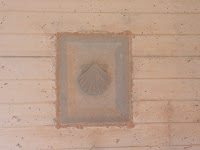 Dinner was FUN that night, we took over the top floor of a cute restaurant and had excellent service, and were served some kind of garlic soup, beef entrecote with fries, ice cream, and you guessed it, all the bread you could eat and wine you could drink. They would literally put an entire bottle of wine in front of each pilgrim! I love Europe. The conversation was lively :) Anna flat out said "you Americans have perfected the art of using a lot of words to say nothing" and she was mainly referring to Lauren who yes, is kinda loud and uses a lot of filler words. Young Brendon sat across from me and was fascinated with my blonde hair, and Guy talked my ear off about how he wished he had half the confidence and optimism that I do. I engaged with him but called him out on some of his limited thinking and he liked the challenge. Everyone was interacting. We finished dinner, I had a nightcap out front with Anna, and then headed to my bunk. Once I was back in the dorm I discovered I was sleeping next to Brendon (which is always kind of weird to sleep right next to a guy you half-way know by now and you sometimes walk with on The Way) so I decided to get my things ready for the next morning. I laid everything out, put in my ear plugs and wished everyone a good sleep. 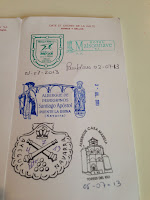 "Your daily life is your temple and your religion."
- Kahlil Gibran