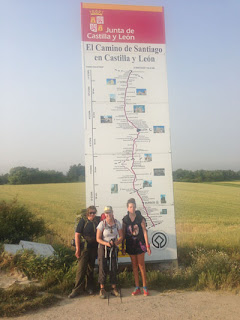 Up at 6:30, out of the monastery by 7:30am with the usual morning routine. Anna, Dee and I had coffee and tea on the way out of town, but stopped for pastries in Granon, the next village. Paul from Holland must've gotten a late start because he showed up in Granon on his bicycle just as we were finishing our breakfast. He was smiling and flirting with me and everyone was looking at me giggling under their breath. I told them nothing happened, he's just flirting, and when he got on his bike to take off, he said goodbye and that he hoped we would have a chance to meet again, wink wink. I smiled and said I felt the same and just then, as he started to ride away, he was still turning back and smiling at me, when he almost hit the poor woman sitting at the next table. He nearly fell off his bike, shuffled a moment to gain his balance, righted his way, and then turned back again and waved. It was cute and everyone waited a few seconds and then burst out laughing! 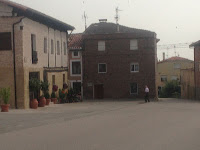 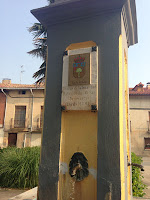 I set off with Dee and Anna and absolutely loved walking with them. We had some serious ground to cover today but decided that since we got an early start, we could take breaks along The Way. Anna had the fastest pace, then Dee, then me and once we hit the next town, we waited for each other and soaked up the tranquility of country life. Someone told us that half of The Way today was right by the main busy highway so we enjoyed the little town of Viloria de la Rioja for a long time. It was while we were sitting there that a truck came through town with a loudspeaker saying something to the residents. It sounded to me like "Hola peregrinos, I have Cava" and that made Dee and Anna laugh hysterically because when he repeated his announcement, it did sound like that! They started joking about how I'd get a little scooter and drive along the Camino pouring free Cava for the pilgrims :) As it was, he was making an announcement that he was there for the day to fix any appliances that needed to be fixing. Then, he drove by where we were sitting and in the middle of his spiel, he looked at us and said "Hola" over the loudspeaker, it cracked us up. We lingered awhile longer watching the cutest kittens playing and drinking from the fountain and finally headed out towards Belarado. 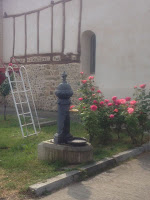 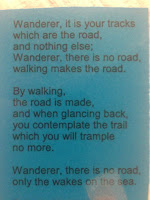 It was a long walk and the road was not well marked but eventually we made it. Once again, hobbling into town, up one final hill (why do they do that to us!), Dee and I could barely walk. Anna was waiting for us and we checked into a nice, private alberge that had a swimming pool! It also had a large dining hall and a grocery store there on the premises so one did not need to leave if one did not want to. I immediately took a shower - nice showers here, private, locked, plenty of hot water, no time limit - and changed and headed out to see who else was here. There was Esther and Yenny, who everyone liked, and Brian from Ireland, who wasn't everyone's cup of tea but I liked him. I hung out for awhile, eating and drinking, and then headed to the pool. It was glorious. I finally got some yoga in today too and helped stretch Anna's back. Dee and I gave each other foot rubs and proceeded to relax for the rest of the day. This is when I got my nickname Erecto-Erin because I have an "erector set of nipples," someone said "in honor of Farrah Fawcett's red swimsuit poster," and that during the day, "the #2 pencil erasers can even be seen through a padded sports bra." The last thing I wanted to do was wear a bra at night but it was too obvious in my flimsy little t-shirt so they sent me back to my bunk to at least put on a black shirt. Anna asked "are they always so erect like that" and I said "yes" and Dee said "people pay money to get nips like that" and I said "I wouldn't know." Esther said "it doesn't matter anyway, Paul is already in Burgos" and everyone chuckled. I knew they were teasing me so I played along, but when talk finally turned to our feet, I was glad to be out of the "headlights." These are the things you learn about each other when you're basically at adult summer camp! 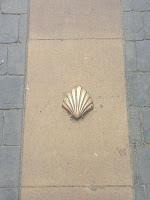 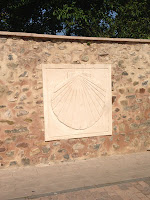 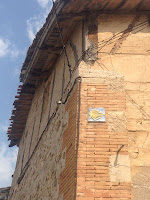 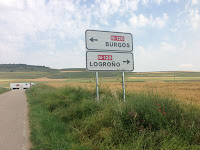 We had a tasty pilgrim dinner while watching a slide show of pictures that people had taken along the Camino. There was even a photograph of Paulo Coelho, and several shots of The Way during winter time. I said out loud "I would not want to do this thing in winter time" and everyone agreed. We bought our supplies for the next day and headed to the dorm. We had walked 23 kilometers today and for the first time we were all next to each other (in a room of 16 beds) and this time we were the loud ones, talking and giggling until well into the night. It had been a great day and this place was WAY BETTER than the creaky beds and loud noises from the miracle cocks of last night.

"I don't know what your destiny will be but one thing I do know; the only ones among you who will be truly happy are those who have sought and found how to serve."
- Albert Schweitzer