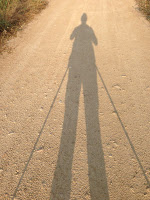 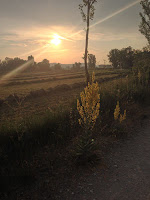 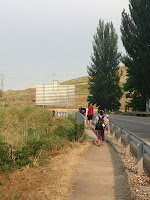 Up at 6am, out of the hotel by 6:30am, I was walking the deserted streets of Burgos. I thought about stopping for a tea with my pre-purchased pastry but the characters in the cafe were still out from the night before so I passed on by. It was hard finding the arrows in the city and I had to ask several times if I was on the Camino. Finally I received confirmation when I saw a sign, always a relief, and I proceeded to follow a group of pilgrims out of town.

It was a crystal clear morning with the sun slowly rising as I ambled along the main street, then down by a stream, and out into the country. The next little town was near and again, it was difficult to figure out which way the Camino went. I could see ahead a group of pilgrims off to one side sort of milling around and I thought to myself "they look lost." Just at that moment, a Spanish woman came up to me and said something in Spanish, pointing that I should go this way instead of that. I decided that even though I couldn't understand her, I'd take her advice and only when I started walking in the direction she was pointing, did she smile a confirmation and go about her way. A couple of kilometers later and I saw the same group ahead, milling around, and then slowly I came upon them. Only then did I realize I was approaching the side of the highway. We were all apparently lost. There were about nine of us, the group of three guys I had followed out, two couples, and another solo traveler like me. Someone had a book and knew we had to be "near the river by the overpass" so we ran across the highway and down the shoulder. It was then that we saw other peregrinos heading under the overpass so we knew we were right. However, there was a fence and we couldn't get around it. Finally one of the men found a concrete slab at an angle and proceeded to lift the fence as high as he could so we could each, one by one, shimmy through the bottom. It was quite the sight, a factory line of one guy lifting your backpack over the fence while the other one holding it up so each of us could go under it. Pilgrim teamwork. We still weren't satisfied for another kilometer until we saw not just a yellow arrow again, but an official Camino sign. 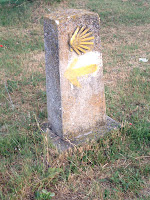 Today I was leaving behind the built environment and heading into the relative wilderness known as the Meseta. Wilderness might not be the right word for it since it resembles more like a walk through the Great Plains, but wilderness is what it is nonetheless. The Meseta is known for its endless crop fields, wheat, barley, oats. There are also shepherds and foxes and as always, the sky scissor birds. I was told there is little or no shade in the Meseta so it's important to keep drinking water and protect one's self from the sun. I was already sporting a serious farmer's tan, but I knew I had to be careful for my face and ears and even the top of my head. The new ritual began starting out the day without my hat and glasses, and then after the first big jaunt, covering up. Many people were headed to Hornillos del Camino, I on the otherhand, had no set schedule and was going to go as far as my legs would take me. 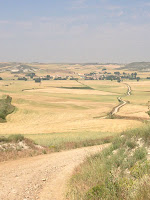 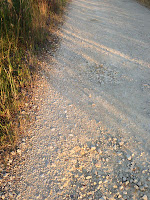 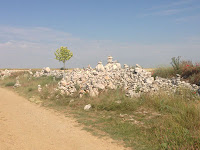 The waymarked route went through a number of still picturesque towns with pilgrim monuments and fountains. I stopped several times along The Way to enjoy my wine and saucisson and when I finally made it to Hornillos, I ran into Lauren from Washington and ate lunch. At the ripe age of 22, she obviously hadn't bussed any legs so far like I had and was keeping up a good pace. She had been resting there in the square for awhile and was ready to find a place in town when I borrowed her book, started reading aloud about the next village, and convinced her to go on with me. Even though she had a serious blister like I did, she was glad! Sometimes that's what it takes, someone else to come along and keep you going. As we walked along The Way, she told me that her boyfriend called last night and proposed to her! 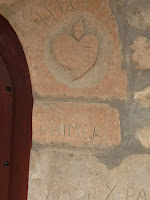 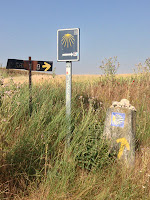 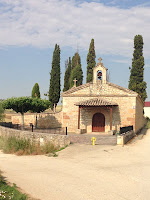 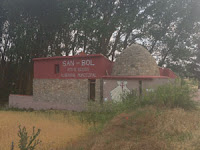 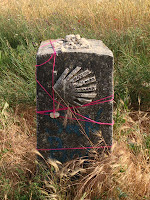 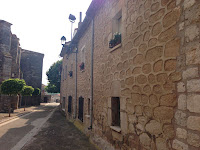 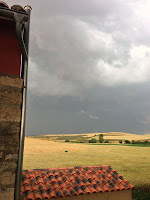 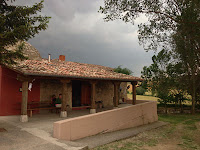 Lauren and I went ahead, destination San Bol, talking about her new fiance :) The book said "cross over the stream and continue on to the 12-bed Municipal Alberge with communal meal. Set in a delightful location (with new shower and new wc), it is by a grove of poplar trees offering shade by the river. The waters from the well are said to have healing properties and to cure aching feet. The peace of this isolated spot can heal more than just feet." It sounded like just the ticket. It was getting late so we prayed there would still be two beds for us. She forged ahead and by the time I hobbled up to the front door, there was still a bed for me.

It was in a beautiful old country house with a large dormitory, fresh breeze, big round dining room and lovely outdoor oasis. It was a nice change to be part of such a smaller alberge. I crashed on my clean, squeak-free, lower bunk for a few minutes, showered - shower good here, private, locked - changed into my comfy yoga pants, and went down to soak my feet. There was a storm blowing in and it was beautiful.
Here is a video of the incoming storm! 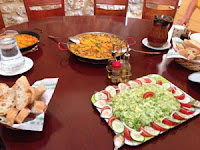 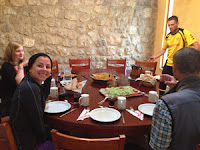 I walked 27 kilometers today and I was super glad that I wasn't out on the road in the rain, and just when I thought that, it started to hail! There were a couple of women on the balcony, a German girl and a New Yorker and all the New Yorker could think to say is "this is better than television." There was a Hungarian woman too who was out dancing in the rain, she loved it. I also met a younger German guy who reminded me of Rudi, a German guy my age who was a physicist, and a young Swiss man who had started his Camino in Switzerland. When I want back inside to rest and write in my journal, it was so cozy in our dorm, all you could hear was the rain against the window and the warden in the kitchen chopping vegetables. It started to smell oh so good and before I knew it, our communal dinner was served. A lovely meal of mixed salad, paella, and all the bread and wine you want. A few toasts were made but no one spoke much, it was very peaceful, and for that I was happy.