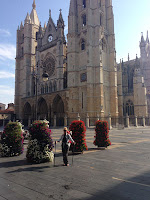 Up at 7:30 out of the alberge by 8:30am, the next stop was Leon. I had been advised to bus it into Leon from Mansilla de las Mulas because the Camino goes through industrial complexes and then runs along the highway where the speeding trucks pose a danger. Brian from Ireland told me last night he was busing it in on the 9am.  I knew I would bus it in too but I was in no hurry. Unsure where he was, and unsure of where the autobus station was, I decided to have tea and pastry and then ask someone. He emerged at about 8:45 and said I should try and catch the 9am, which I did try, but I missed it. I came back and he and I decided to take the 10am bus so we waited at the station together.

It took less than an hour, and less than 5 Euros to get there. Amazing how it takes us hours to walk, but with cars and buses, mere minutes. Once we arrived, I had every intention of staying and exploring the city and having a rest day. Leon has an amazing history! We went to the Leon Cathedral and milled around awhile talking to other pilgrims. The Camino ran right through the beautiful old part of town directly to the Cathedral. We took our time, ate breakfast and then he was getting ready to go. I thought "you know what, I'm ready to go too." And just like that, I changed my mind. Sometimes that's all it takes, someone to get you going and it feels good to keep going. So as we walked by the Parador Hotel (where they stayed in the movie) and headed out of the city, I stopped off at a supermercado and stocked up on wine and saucisson. 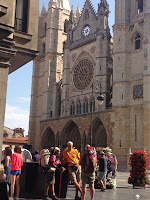 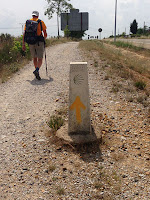 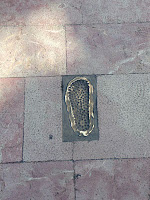 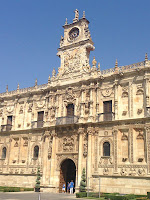 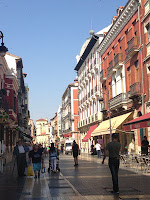 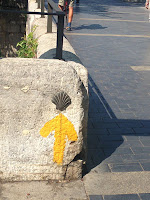 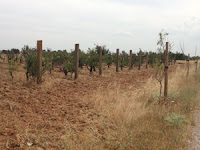 The walk out of the city took awhile due to urban sprawl, but then we finally hit the dirt trail again and Leon was behind us. Wow, this was another big accomplishment in my mind, now I'd made it half-way, or actually two-thirds, as I surmised the final third of the Camino, through Galicia, would be different than the mountains of the Pyrenees, the wine region of La Rioja and the endless wheat, barly and oat fields of the Meseta. There was an option for an alternativo route, I was skeptical but Brian from Ireland led the way. 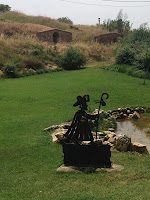 On The Way, we passed a series of hobbit-looking structures built directly into the hills. There had been a debate last night as to whether these are bodegas that store wine, or actually working bodegas where wine is made. It was very picturesque and there were a variety of pilgrim statues as well as that San Anton Pilgrim Cross. Later I took a picture of a billboard for a Spa in Astorga so I could stay there, always nice to have something to look forward to :) We headed onward, destination: Villadangos del Paramo. Villadangos, the name alone made us laugh. Even though he'd done the Camino before, Brian from Ireland didn't remember everything and this time he was staying at new places, so we didn't really know what to expect. It's a good thing we didn't have high hopes. 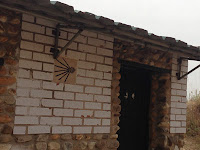 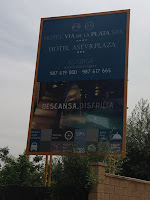 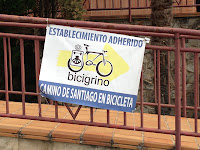 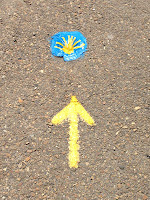 The dusty walk next to the main road was getting long! He was way up ahead of me and I started having delusions of simply falling down. You know, just collapsing and rolling over onto the side of the busy road. Pilgrim roadkill. I imagined me lying there, listening to the crackle over the radio "All units we have a pilgrim down, I repeat, pilgrim down. Proceed to kilometer marker 22, I repeat, pilgrim down." When I finally hobbled into town, I saw the Municipal Alberge and climbed up the hill (why to they do this to us!) to check in. I could see Brian's name on the paper ahead of mine, which meant I got the bed next to him (always kind of weird for me, I must say). These places have rules, and at the Municipal Alberges you can't pick your bed. He was fast asleep so I went to shower -worst shower yet, no hot water, no pressure, flimsy curtain, co-ed so I didn't wash my hair - and then went into the main room.

I met Emile from Holland who was cooking pasta carbonara and he offered me some, so I retrieved my wine bottle and offered him some wine while we ate and talked. A Spanish couple joined us and then another guy from Denmark and a Canadian who was doing the Camino with his dog! He was staying in a tent out back, apparently some places allow dogs (but they have to stay outside) like other places cater to "Bicigrinos" the strange mutation of primarily male Italian pilgrims and their bicycles. Once Brian emerged, we headed into town and ate the worst pilgrim menu to date. "That's what happens" I thought to myself, "when you follow someone else." Even though that's not entirely true, it sure felt that way. We laughed as we watched the sad town of Villadangos try to prop itself to life, but there was little hope, so we shuffled back to the alberge, had a nightcap outside with the others, and headed to bed, earplugs in. All in all I had bused 20 kms and walked 22 kms today. 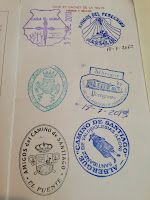 "To dry one's eyes and laugh at a fall, and, baffled, get up and begin again."
- Robert Browning